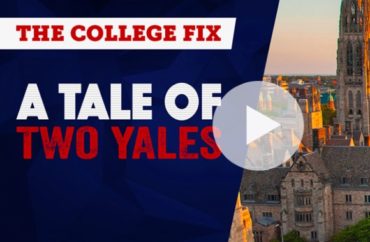 College Fix staff reporter Jeremiah Poff recently traveled to New Haven, Conn., to visit Yale University. During his trip, he attempted to view a stone carving that two years ago had been deemed too offensive to view, and was censored. At the time, Yale officials promised they would make the artwork available for view and study elsewhere. Two years later, and the controversial piece sits behind a box, unavailable for viewing.

But not all hope is lost for this Ivy League university, it still has a few scholars willing to speak fearless truth. Among them is Professor Anthony Kronman, whose new book “The Assault on American Excellence” chronicles the problem with higher education’s radical embrace of egalitarianism at the expense of celebrating excellence.

On the latest episode of Campus Roundup, Poff tells of his recent trip to Yale to speak to Kronman, as well as his attempt to see the infamous stone carving.