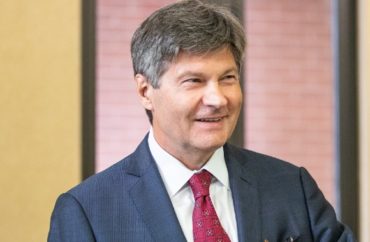 Bobby Burchfield (pictured), through his family foundation, “has made a landmark gift to highly ranked GW Law to create a new professorship and recruit a nationally-recognized scholar to teach his passion, Free Speech and First Amendment law,” the D.C. university announced.

He has served as counsel to Republican presidents and also successfully argued two First Amendment cases in front of the Supreme Court.

McConnell is a 2003 SCOTUS case that struck down portions of a campaign finance law.

McCutcheon is a 2014 decision “that struck down the aggregate limits on the amount an individual may contribute during a two-year period to all federal candidates, parties and political action committees combined,” according to the Federal Election Commission’s summary.

He is a former editor-in-chief of the GW Law Review and taught a course this summer on First Amendment jurisprudence.

As part of his commitment to Free Speech, during the Spring Semester of 2022 Bobby taught a seminar at The George Washington Law School entitled “Fundamentals of Free Speech as Applied to Contemporary Issues.” Bobby created a unique syllabus for the course, collecting and assigning readings from great thinkers and important judicial decisions addressing free speech issues.

“The students report coming away from the course with a better appreciation for the power of free speech,” the website states. They also learned about “its central and unique role in the American character, and the difficulty of constructing workable restrictions on categories of speech.”