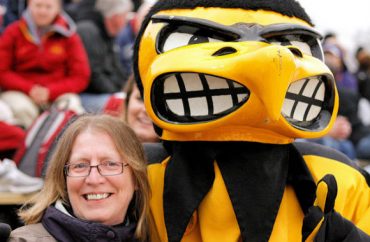 Resmiye Oral is in the business of treating sick children, which gives her unique insight into what will make the University of Iowa’s special snowflakes freak out.

The clinical professor of pediatrics is lobbying the school to give Herky the Hawk, its intense-looking mascot, a different set of expressions because – seriously – his face is too angry, the Iowa City Press-Citizen reports:

Oral’s message to the Faculty Senate came in response to a series of posters and fliers on campus with messages welcoming new students — “On Iowa! Welcome Class of 2020! You’ll always be a Hawkeye. This is where it begins” — atop the images of Herky or the Tigerhawk.

“I would like to bring to the Faculty Senate’s attention that the attached Herky images are totally against the nonviolent, all accepting, nondiscriminatory messages we are trying to convey through campus,” Oral wrote in the email to her fellow senate members.

Herky’s angry, to say the least, faces conveying an invitation to aggressivity and even violence are not compatible with the verbal messages that we try to convey to and instill in our students and campus community.

Herky’s lack of emotional range – his perpetual “teeth-baring scowl,” as the Press-Citizen calls it – might somehow encourage students to kill themselves, Oral says:

As we strive to tackle depression, suicide, violence, and behavioral challenges and help our students succeed, I plead with you to allow Herky to be like one of us, sometimes sad, sometimes happy, sometimes angry, sometimes concentrated.

The athletic department says it’s “in the process of formulating a response in regard to the Herky images,” but the administration isn’t promising any sudden changes, saying that changing Herky could harm “the value of its brand and logo.”

The Daily Caller notes that Oral isn’t the first University of Iowa professor to freak out on the athletic department: Two years ago a communications professor dressed as a robot to protest the pink color of the visitors’ locker room (we’re as confused as you).

MORE: U. of Iowa says it protected ‘inclusiveness’ by censoring statue