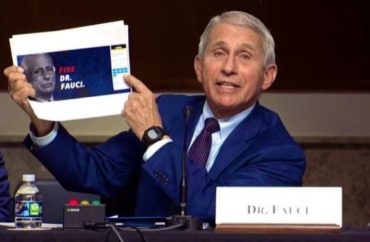 Without specifically mentioning the 45th president or his party, Fauci said it “is blatantly obvious that we are experiencing a deepening divisiveness in our nation, fed by a flagrant devaluation of the truth,” the New York Post reports.

“While genuine differences of opinion or ideology are part of a healthy society, increasingly we are hearing, reading and seeing outlandish statements and pronouncements propped up by deliberate distortions of reality,” Fauci said. “Fabrications, conspiracy theories and outright lies are becoming commonplace from radical fringe groups as well as from people who you would hope would know better — and you know who they are.”

Fauci’s comments come but days after he said he wouldn’t get involved in politics related to the 2024 election.

The remarks by President Biden’s chief medical adviser and longtime director of the National Institute of Allergy and Infectious Diseases were greeted by an apparent shout of approval from someone in the audience.

“I think it was a bold and correct move by Fauci to speak on that and bring that light to that at our graduation,” said Daisy Pinos, 24, of Queens, who received a bachelor’s degree in psychology.

“He definitely has the right audience here, and he knew that.”

“I love the fact that everyone knew who he was talking about,” said Khan, who received a bachelor’s degree in international studies and economics.

“The girl behind me was like, ‘Yeah, that’s our ex-president.’”

Last summer, a Baylor College of Medicine professor suggested federal hate-crime protections be extended to Fauci and other scientists as part of an effort “in halting the aggression” from “far-right extremists.” This summer the College of the Holy Cross plans to rename its Integrated Science Complex after the doctor.