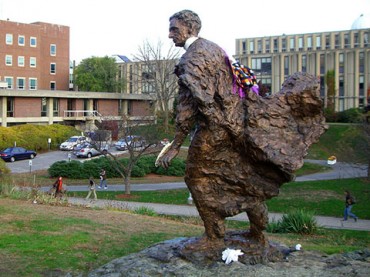 It takes a load of chutzpah to claim that your 140-character declarations were taken out of context when they were retweeted, but that’s what besieged Brandeis University student Khadijah Lynch is doing in response to her tweets about assassinated New York City cops.

Lynch, you may remember, tweeted that she had “no sympathy” for Wenjian Liu and Rafael Ramos, executed without provocation by a cop-hating gunman. Her comments were retweeted by fellow student Daniel Mael, who was then accused by a campus leader of stalking Lynch.

Now Lynch is talking to the Boston Globe, which as The Daily Caller notes took nearly two weeks to notice the hubbub 16 miles away:

In defending the statements, Lynch said they reflected raw anger and frustration following the fatal shooting of a 12-year-old black boy by a police officer in Cleveland and grand jury decisions in Missouri and New York to not indict white police officers in the deaths of unarmed black men.

In that light, “it was hard for me to conjure sympathy for those police officers” shot to death in New York, she said.

But, she added in a telephone interview, “Not having sympathy is not that same as rejoicing or saying that they deserved to die. I think all human life is valuable; I’m not a violent person; and I don’t condone violence. I was very sympathetic for the families.”

Lynch says she stands by her tweets despite claiming they were taken out of context:

“I stand by everything I said on my Twitter account. . .  I don’t want to live in a country where police can get away with murdering black children and black people and not be held accountable.”

Mael said Wednesday he was shocked by the attention his post received and by much of the reaction. He said that he re-published Lynch’s tweets because “students on campus deserve to know when other people on campus, particularly student leaders, support violent acts and express a lack of sympathy for murdered police officers.”

Lynch resigned her position as undergrad representative for the school’s African and Afro-American Studies Department following the attention, and the department chair said she in no way represents its views.

Don’t expect any more searing social commentary from Lynch in public – she made her Twitter page private.