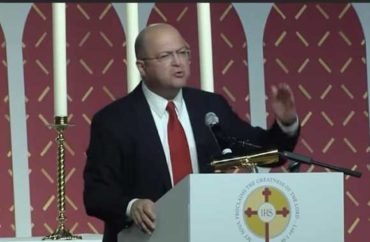 The former dean at the University of St. Thomas allegedly claimed a Ph.D. from a school that does not award doctoral degrees

Mario Enzler announced his resignation Tuesday as the dean of the Cameron School of Business at University of St. Thomas in Houston following accusations that he misrepresented his educational credentials, including his doctorate, The Chronicle of Higher Education reported Wednesday.

His resignation was effective last Friday.

Enzler (pictured) had held the position for just two years. John Simms, an accounting processor of the school who was entrusted with gathering accreditation documents from business school faculty, told The Chronicle of Higher Education that Enzler had failed to submit required paperwork from his courses, including syllabi and grades.

Enzler’s University of St. Thomas faculty page appears to have been removed.

Deciding to research Enzler’s background, Simms and other faculty members called the institutions that had allegedly awarded the dean’s degrees. Enzler had claimed to have a Ph.D. from a music conservatory in Italy, but the school doesn’t offer doctoral degrees, The Chronicle of Higher Education reported.

Enzler’s curriculum vitae listed a doctorate in music and a bachelor’s in classics, according to The Chronicle, which stated it had reviewed the document but did not provide a link to it.

Simm “filed an internal grievance seeking the termination of both Enzler and Christopher P. Evans, vice president for academic affairs, who Simms said had hired Enzler,” The Chronicle of Higher Education reported. The grievance was later suspended.

Beginning this past April, faculty members, including Simms and accounting professor Ramon Fernandez, wrote letters to the university arguing that Enzler should not serve as dean of the business school, The Chronicle of Higher Education reported.

“The Italian university where Enzler said he received a doctorate does not offer Ph.D.s, and the institution where he said he got a Bachelor’s is actually a high school, several concerned professors told the private Catholic institution,” the Houston Chronicle reported in a story updated Wednesday.

Fernandez said that Enzler “later admitted that he lacked a doctorate, but the university continued to use ‘Dr.’ before his name and ‘Ph.D.’ after it,” according to The Chronicle of Higher Ed.

The school created a leadership council comprising three faculty members to serve as interim deans until a new one is hired.

“I just don’t want it to happen again,” Fernandez told the Houston Chronicle. “Really, the guy is a charlatan, he’s a fraudster and he’s a con artist.”