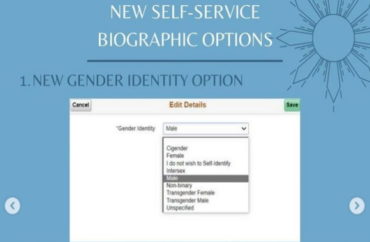 Student government considers misgendering ‘an act of violence,’ according to one senator

The Campus Connect system is a web portal that houses information on and for students, faculty and staff for communication and other purposes.

“In addition to the Legal Gender, students may now also include a Gender Identity,” the Student Government Association announced January 4.

The platform allows students to choose either: male, female, intersex, non-binary, transgender male, transgender female, cisgender, unspecified and “I do not wish to self-identify.”

“The change comes as Oracle, the company that created Campus Connect, added the feature allowing students to disclose their gender identity,” the DePaulia student newspaper reports.

“With this release, DePaul jumped on the opportunity to ‘promote ways for students to express their identity, if they choose to do so,’ according to Michael Wright, assistant vice president at DePaul’s Registrar Office.”

Riley Reed, the Student Government Association senator for LGBTQ+ students, told the DePaulia that the student government considers misgendering “an act of violence.”

“Simply put, misgendering folks is harmful because it allows for trans and gender-expansive folks to be seen as jokes or as less of a person. It can make the person feel like ‘they are not important enough to remember,’ which is incredibly harmful,” Riley stated.

“I would say that they should focus their energy on improving DePaul’s campus and resources, not over gender,” he said.

Eisenhut also said he disagrees with the notion that misgendering is “an act of violence.”

“I mean the definition of violence is physical force used intended to hurt, so no, I do not think it is the same thing as violence, but for some people it is physiological violence,” he said.

The College Fix reached out to DePaul University, the student government, and Senator Reed for comment, but did not receive a response.