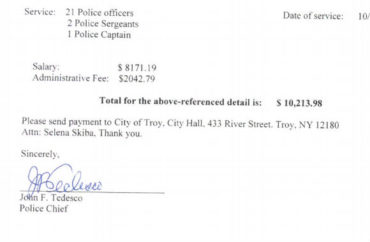 Rensselaer Polytechnic Institute has taken an aggressive stance toward student activists who want to protect the autonomy of their 128-year-old student-run union, which is funded by students and responsible for student activities.

The private New York institution blocked campus media coverage of the dispute, removed “Save the Union” signs that were posted according to campus rules, and charged some protesters with trespassing after they peacefully protested outside a university fundraiser in October 2017.

Its lawyer only muddied the waters further by claiming that students wouldn’t be disciplined as long as they practice “civil discourse (e.g., not hate speech or threatening).” Its Student Handbook does not define “civil discourse” or “hate speech.”

The school even tried to block student protesters from a public sidewalk by claiming it had “eminent domain.”

Now it looks like the City of Troy, where the institute is based, is hiding records that show the relationship between its municipal police and RPI.

The Foundation for Individual Rights in Education, which has been pressing RPI for answers to its behavior for the past year, obtained police footage of the October protest through a public records request this spring.

Not only did it undermine the administration’s claim that protesters were rowdy, but it showed that RPI could summon the government – 24 Troy police officers – to make students think twice about publicly protesting, wrote Adam Steinbaugh, director of FIRE’s Individual Rights Defense Program.

The risk was not idle: Police handed over the video to the institute, which then identified and charged several students with conduct violations.

MORE: RPI claims it has ’eminent domain’ over public sidewalk

The city has been less forthcoming with other documents, though, suggesting it did not conduct a good-faith search in response to FIRE’s request and is now actively withholding them, Steinbaugh wrote this week.

FIRE knows that the institute paid the city for police officers to monitor the peaceful protest, because Save the Union protesters obtained an invoice for more than $10,000 signed by the Troy police chief. The institute did not dispute the authenticity of the invoice but insisted to the Times Union that it did not tell police to record footage of protesters.

The invoice calls into question the claim by Troy’s legal counsel, James Caruso, that records of communications between police and RPI “do not exist,” according to Steinbaugh:

FIRE sent a letter to Troy Mayor Patrick Madden in August after the city stopped responding to its request.

Steinbaugh warned him that the city will have to pay attorney’s fees if FIRE sues and a judge agrees that the city had “no reasonable basis for denying access” to the records under the state public-records law.

Not only is there strong evidence that the city failed to conduct a “diligent search” as legally required, but the city is now refusing to even produce records “that would establish what search — if any — it conducted in response to the first request,” Steinbaugh wrote.

The city is also in “procedural violation” of state law because it has failed to meet “every approximate date” it has given FIRE for telling it in writing whether the records will be turned over. Troy didn’t even give FIRE an approximate date in its most recent response:

In comparison, nine months have now elapsed since the initial request for records was made, and nearly eight have passed since the second request. This does not approximate compliance with the letter or spirit of the Freedom of Information Law.