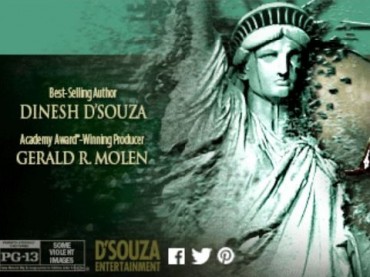 Dinesh D’Souza’s new movie is poised to be a big hit – Rush Limbaugh even predicted it will be “huge” – and college conservatives are striving to help make that happen.

“We would love to pack the theater on opening night!!” USC College Republicans stated on Facebook as they rallied their members to converge at the Arclight Cinemas in Hollywood on Wednesday, when it opens nationwide. “If you aren’t in LA please go and see it at your local theater.”

Meanwhile, the docudrama America: Imagine a World Without Her  enjoyed a glowing review on The College Conservative.

“America demolishes the worn out … list of grievances progressives have compiled over time in their efforts to subvert the nation to an ideology of self-hatred and division,” writes Vladimir Davidiuk, who attends the University of St. Thomas in Houston. He adds:

When confronted with actual history, progressive indictments against America fall apart, and they fall silent when presented with the possibility of a world without America. In the last century alone, with actions in WWI and WWII, America saved the civilized world. In spite of her detractors, who focus on the few failings of America,  and who insist that the nation is a bigoted, discriminatory place with sins that could never possibly be forgiven, around the globe, when crises of hunger, war and natural disaster arise, it is to America that the world’s eyes quickly turn.  D’Souza reminds us all that this fact is with good reason: because despite all its flaws, America is good, has done good, and will continue to do good, as long as we remember and uphold those qualities that made her so.

A photo taken from a packed theater in Los Angeles, where the movie debuted prior to its national release, shows plenty of college-aged students in the crowd, which gave the movie a standing ovation.