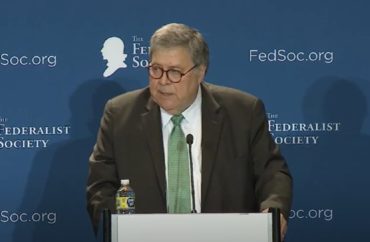 ‘We have to come to grips with and acknowledge that education, the whole educational enterprise, inherently deals with concerns of religion,’ Bill Barr said

Education will always include a moral element, whether or not secular educators acknowledge it, former Attorney General William Barr said recently.

Barr told the Washington Examiner that there is a “strange schizophrenia, where … people will … persuade themselves that education is technical skills or vocational training and that somehow, you can hermetically seal off education from moral and religious considerations.”

“On the other hand, the very same people, at other times, will recognize that education, by its very nature, involves moral questions and teaching of character and values and so forth,” the former attorney general under President Donald Trump said.

“The Left acknowledge[s] that education does have that dimension,” he said. “But they seem to argue that you can deal with those moral issues in a purely secular way and somehow keep religion out of it.”

“We have to come to grips with and acknowledge that education, the whole educational enterprise, inherently deals with concerns of religion,” Barr said. “You can’t avoid it. And because of the current ideology of those involved in public education, they are definitely indoctrinating children with secular ideas versus traditional religious belief.”

The attorney general made similar comments at a Federalist Society event last week, where he criticized the “secularization” of public schools in the 1960s.

“This was secularization by subtraction, stripping away all vestiges of traditional religion,” Barr said.

“But expunging religion does not result in religious neutrality. Instead, the net effect was to elevate the most aggressively secular viewpoints while suppressing any religious views,” he told attendees.

“There is no belief system which explains to people why they have to behave or shouldn’t behave in a certain way,” he said.