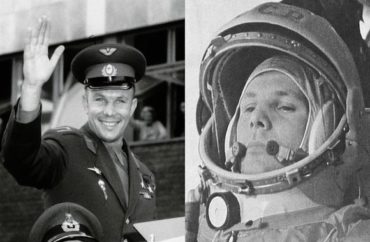 A space-orientated educational nonprofit has canceled the first human being ever to go into space — because he was a Russian.

The Space Foundation, which according to its website offers “a gateway to education, information and collaboration for space exploration and space-inspired industries,” changed the named of an April 3 symposium because of the name “Yuri Gagarin.”

In 1961 aboard the Vostok 1 capsule, Gagarin was the first person to travel into space. He completed a full Earth orbit and was awarded “Hero of the Soviet Union,” the former USSR’s highest honor.

“In light of recent events,” the Space Foundation changed the symposium’s title from ‘Yuri’s Night” to “A Celebration of Space: Discover What’s Next.”

A note on the event website had said “The focus of this fundraising event remains the same – to celebrate human achievements in space while inspiring the next generation to reach for the stars.” The note along with the name-change explanation has since been deleted.

Ironically, according to Futurism, Gagarin was very popular in Ukraine.

For instance, a 2011 Ukraine stamp commemorated the 50th anniversary of his pioneering space flight. And the recently-bombed Chernihiv Stadium was renamed by the Soviets as the “Yuri Gagarin Stadium” back in the 1960s, and is also still referred to as such by fans despite a new official name. …

In a post published last year about Gagarin’s often-overlooked relationship with Ukraine, the country’s Igor Sikorsky Kyiv Polytechnic Institute noted that during his first and only visit to the capitol city in 1966, the cosmonaut had kind words to say about the country’s capital, which was part of the USSR at the time.

“My friend Pavel Popovich told me a lot about the beauty of Kyiv,” Gagarin reportedly said when visiting school children at a youth center, “but what I’ve seen with my eyes is incomparable to what I’ve heard!”

It remains to be seen if “Star Trek” will follow the foundation in canceling Gagarin — considering it has named not one, not two, but three Starfleet ships after the iconic cosmonaut.