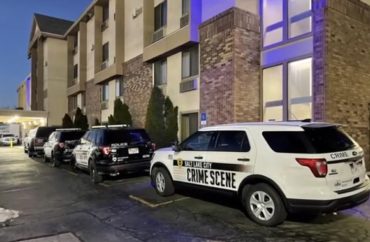 An international student from China is in police custody after injecting his girlfriend with a lethal substance, which he told police he did to fulfill a suicide pact.

“During their investigation, detectives assigned to the SLCPD Homicide Squad learned Wang claimed he killed the victim and then attempted to kill himself by reportedly injecting himself with drugs,” the police department announced on February 11. “Detectives also learned Wang and the woman were in a romantic relationship and had been living together. As such, this case is being investigated as a domestic violence-related homicide.”

“Wang told police that he and his girlfriend intended on committing suicide together,” ABC 4 reported. “He told them he ordered fentanyl and heroin on the dark net.”

“Wang and the victim snorted heroin together and he says she began vomiting and become unresponsive with ‘labored breathing,’” ABC reported. “Wang told police she was still breathing but suffering, arrest records state.” The news site did not provide a copy of the arrest record.

The university released a statement mourning the loss of Wang’s girlfriend, Zhifan Dong.

“The death of any young person embarking on adult life is devastating. And, unfortunately, domestic violence is more prevalent than many of us are aware, even among college students,” the university stated in an email to the university community. “On behalf of the university, we extend our heartfelt grief and sympathy to the family, friends and classmates of the victim during this incredibly difficult time.”