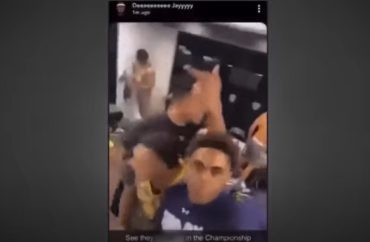 Four basketball players for Kent State University were punished with a loss of playing time during Saturday’s game against University of Akron in response to a video of them trash talking their opponent.

DJ Johnson, Malique Jacobs, Cli’Ron Hornbeak and Julius Rollins were all suspended for varying lengths of time for posting and/or participating in the video, which was posted on Friday night sometime after Kent State’s victory over the Ohio Bobcats.

Johnson was suspended indefinitely, while Jacobs, Hornbeak and Rollins were all suspended for the first half of the tourney final against Akron.

“I’m disappointed this occurred,” Mid-American Conference Commissioner Jon Steinbrecher said according to Sports Illustrated. “This does not represent the values of Kent State or the Mid-American Conference. However, I commend the leadership of Kent State for being proactive in addressing this matter and collaborating with my office to bring this situation to resolution.”

Akron defeated Kent State on Saturday to win the MAC championship title and earn a spot in the March Madness tournament.