‘We recognize the great privileges we have been given, and wish to at least partially repay our debts’

Georgetown University students will soon vote on whether they want to tax themselves to benefit the descendants of slaves sold by the university in the 1830s.

Its student government recently authorized a campuswide student referendum on whether to establish a fund for the families of the 272 men, women and children sold by Georgetown in 1838.

If approved, the semesterly fee would begin to be collected in the fall of 2020 and start at $27.20 per student “in honor of the 272 people sold by Georgetown,” states the student government resolution approving the referendum, a copy of which was obtained Wednesday by The College Fix.

“The proceeds of the GU272 Reconciliation Contributions will be allocated for charitable purposes directly benefiting the descendants of the GU272 and other persons once enslaved by the Maryland Jesuits — with special consideration given to causes and proposals directly benefiting those descendants still residing in proud and underprivileged communities,” the resolution stated.

Over the past few years, Georgetown has undertaken a plan to reckon with the legacy of slavery at the private Catholic institution. In 1838, the university sold 272 slaves to pay off its debts. It officially apologized for the sale in April 2017.

In seeking to make amends, campus officials have also renamed two buildings on campus named after the Jesuits who were involved in the sale of the slaves and created an African American Studies Department and a working group on the establishment of an Institute for the Study of Racial Justice. The university has also agreed to “offer an admissions edge to descendants of slaves as part of a comprehensive atonement” for the school’s past actions.

But the student government resolution stated that’s not enough. 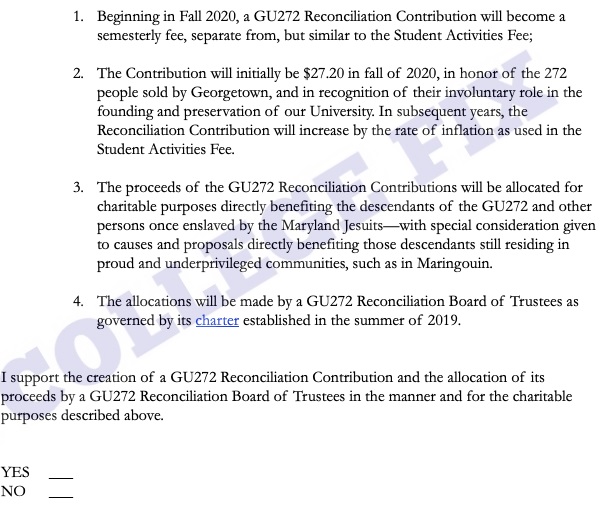 “In the fall of 2016, the Georgetown University Working Group on Slavery, Memory, and Reconciliation published its report and recommendations for how the University should address this shameful history. To date, Georgetown has implemented only some of them,” the student government resolution stated. “Among the recommendations left unfulfilled are the establishment of financial aid for the descendant community, the creation of public memorials to the enslaved persons, and the continuation of the ‘Freedom and Remembrance’ Grant Program.”

“As students at an elite institution, we recognize the great privileges we have been given, and wish to at least partially repay our debts to those families whose involuntary sacrifices made these privileges possible.”

Students receiving financial aid from the university would not have to pay the fee, according to The Hoya student news outlet. And both The Hoya and the Georgetown Voice reported that proponents of the measure now plan to launch an education campaign in support of the referendum’s passage.

Among the four student senators who voted against putting forth the referendum, the campus news outlets report their reasons ranged from the argument that most of the school’s some 7,500 undergrads will not support it to that the university had an obligation to create the fund, not students.

Campus spokesman Matt Hill provided a university statement to The College Fix on Wednesday regarding the matter.

“The Descendant Community, the Society of Jesus, and Georgetown are engaged in a facilitated dialogue with the goal of reconciliation and transformation regarding the legacy of slavery. The process is anchored in the practice of trust-building, truth-telling, racial healing, and transformation. This dialogue will guide our long term work together, which will include creating a memorial and implementing other recommendations from the Working Group as well as new ideas emanating from the dialogue in collaboration with Descendants,” the statement said.

“We appreciate the engagement and support of students and GUSA and will continue to consult with students and other members of the university community as we work in partnership with Descendants on a process that recognizes the terrible legacy of slavery and promotes racial justice in southern Louisiana, southern Maryland and throughout the nation,” it added.

Editor’s note: The article was updated to include a statement from Georgetown University.

MORE: Georgetown U. to give admissions boost to descendants of slaves