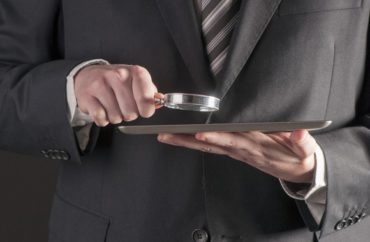 How do you hack slides in a Zoom presentation without identifying yourself?

That’s the question Catholic University of America’s Office of Technology Services will attempt to answer, but the community may never be told what it learns – especially if the incident was a hoax.

President John Garvey notified the community in a Sept. 2 email (below) that “someone defaced the slides” in a Zoom presentation by the Black Student Alliance for the inaugural “Civility Dialogues” forum the day before.

The vandal posted “hateful and vulgar slogans and images” over the slides, Garvey wrote. While he didn’t share the exact contents of the purported attack, he described it as “[r]acially charged speech,” which is “not tolerated” at the university. “This kind of behavior is disgraceful, cowardly, and unacceptable in this community.”

Garvey said OTS was investigating the incident, and the university will take “immediate disciplinary action” if it traces the incident to a member of CUA. “We are updating our security protocols to prevent any reocurrence [sic].”

The email is not posted on Garvey’s communications page. It was forwarded to The Fix by a community member.

MORE: 8 times ‘nooses’ on campus turned out to be hate crime hoaxes 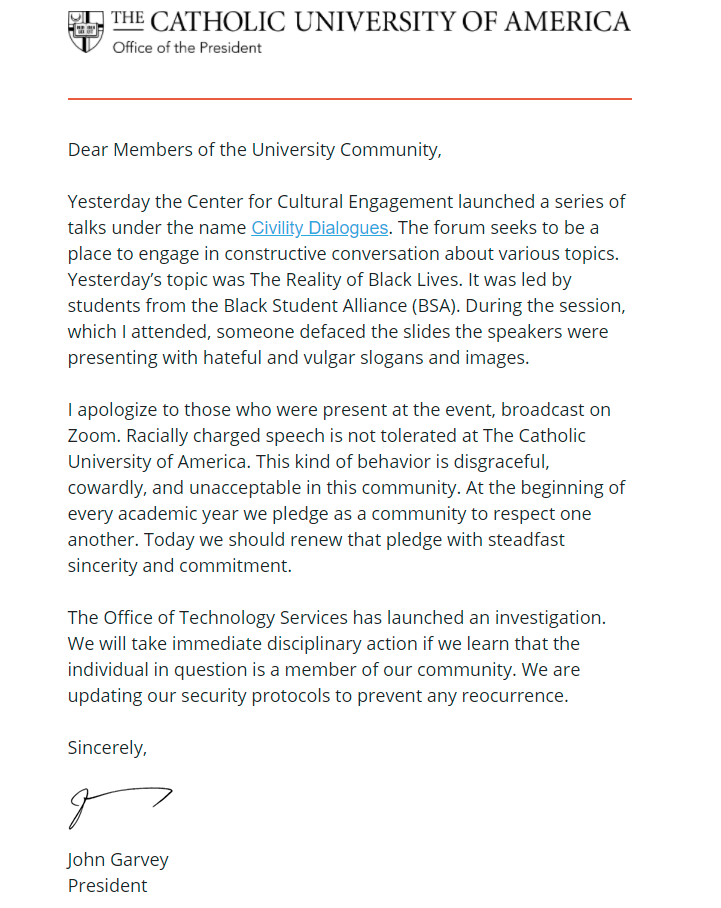 Independent campus newspaper The Tower also hid the exact contents of the purported attack, describing the possible hoax as a “hate crime” before an investigation had determined its nature.

It reported that about 30 people attended the session, whose discussion on “The Reality of Black Lives” was led by the BSA’s leadership team. Presentations covered “medical racism, mental health, generational wealth, black immigration, black and LGBTQ+ life expectancy, and black creativity.”

Soon after a leader started sharing slides, “a racial slur appeared on the introductory slide, followed by a hateful phrase on the second slide.” The leader ended up halting the presentation after consulting with others, who also saw the defaced slides:

Another incident occurred through the Zoom call’s chat function. A photo message, appearing to be from Kelly Woodson, vice president of BSA, had been sent to everyone on the call. Woodson herself had not sent the photo, so when she saw her name appear, she clicked on the photo, which opened to a vulgar sexual image.

The individual using Woodson’s name only appeared for a few minutes, with his or her camera turned off the entire time before exiting the call after the disturbance.

It is unclear as to whether Woodson’s account was hacked or if the individual simply changed his or her screen name to gain access to the slides.

MORE: Prof plans to sue CUA for firing him over tweets criticizing Dems

The Fix asked CUA media relations on Friday to share evidence of the defacing, and explain how someone could anonymously manipulate the slides on a Zoom call if the moderator turned on the annotation feature. 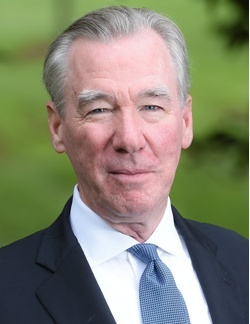 The Fix also asked if Garvey (left) consulted OTS on the technical ability of an anonymous outsider to deface the slides before making his statement; if it would pledge to tell the community if the investigation determines this was a hoax; and if it would pledge to similarly punish any students who committed such a hoax.

Colleges that announce purportedly racist incidents, such as alleged nooses on campus or Zoom hacks, rarely update the community on investigations whose findings don’t fit the school’s narrative.

One of the rarities was Duke University, which told the community that a 2015 noose hanging was committed by a student who wanted to ask his friends to “hang out” and didn’t know its lynching connotation.

MORE: CUA accreditation at risk over treatment of prof for his tweets