Early this month, the Black Student Union at a small Methodist liberal arts school suffered a “Zoombombing” incident, with someone purportedly infiltrating a virtual meeting of the group to spew racist epithets at them.

In response, Iowa’s Simpson College canceled classes the following day to allow students to participate in all-day protests against campus racism. The Simpsonian reported that black students were “tired and more than ready for change,” and that the Zoombombing was just the latest in a series of “repeated racist incidents.”

Simpson President Marsha Kelliher said she was “appalled” by the Zoombombing incident, and she promised it would be “treated with the utmost urgency.” Kelliher noted the Indianola Police Department and the college’s IT department would be working to find the culprit.

Protesters used the Sept. 2 demonstration to their advantage to make several demands, including “compensation for the trauma people of color have endured” at the college, “immediate banning of all confederacy related t-shirts, hats, etc. and racist symbolism” and “no disbanding pro-Black Lives Matter protests on campus.” 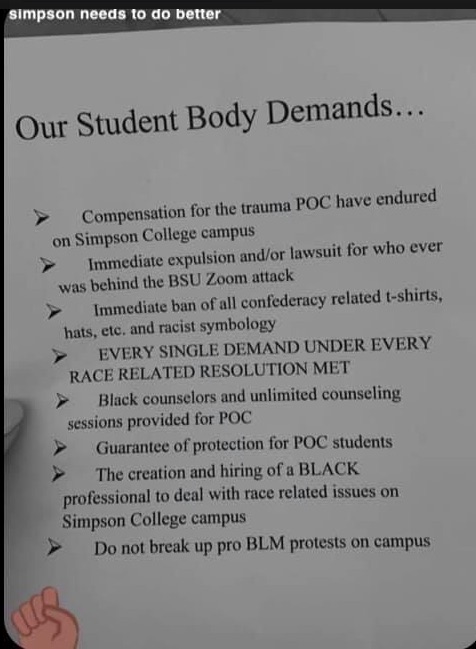 What’s interesting is that the night before the Zoombombing incident, someone spraypainted “Black Lives Matter” and other graffiti on the Simpson-adjacent Irving Elementary School. After The Simpsonian posted pictures of the graffiti (which, apparently, it has since removed), the Student Government Association scolded the newspaper for using the term “vandalism” without offering “additional context.” 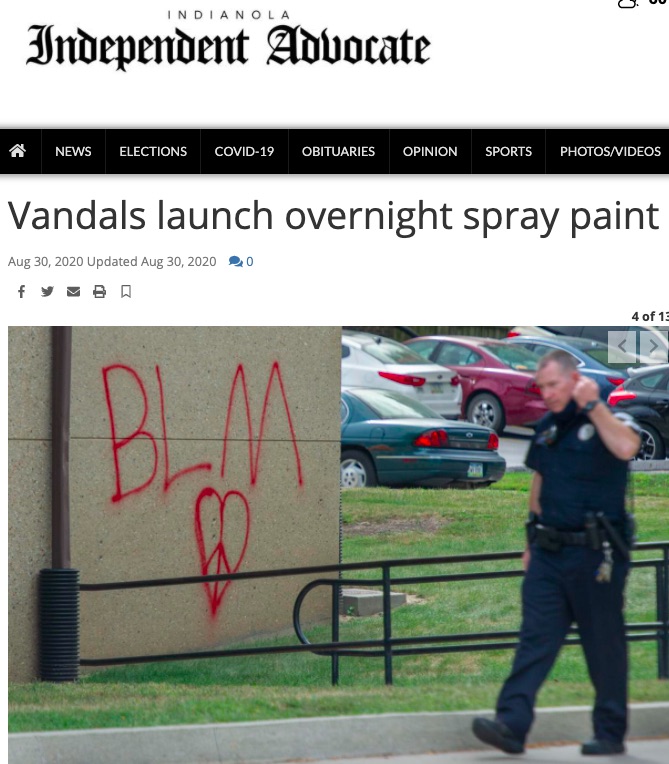 Indeed, the Simpsonian editorial board not only ended up apologizing for publishing the photos, but also published a letter to the editor “explaining” how graffiti isn’t necessarily always vandalism.

In an email to The College Fix, the father of a Simpson student said the photos’ publication also led to approximately 10 Simpson students, including members of the Black Student Union, to march to President Kelliher’s office.

They refused to leave until they could complain to her in person … an opportunity which they eventually got, said the father, who requested anonymity. However, Kelliher’s words — such as still referring to the Irving graffiti as “vandalism” — did little to soothe the students, and they left angry.

The next day, the Zoombombing incident occurred.

The father also said there was no campus security evident at the Sept. 2 protests, and students who did not participate or attempted to enter campus housing during that day were threatened.

“I think this is a start towards having everyone on campus understanding the struggle that black peoples on this campus endure and black people in general endure, I ask anyone who is not a POC to do that they can to help” – Trenton White, junior pic.twitter.com/tBNLtJhYX0

More photos from today. Speakers will begin at 1 PM. pic.twitter.com/YvKnKwW5kz

The Zoombombing matter had been turned over to the “proper law enforcement agencies,” Simpson Vice President for Strategic Communication Cathy Cole told The Fix via email Sept. 21. She said the administration would not comment further on an active investigation.

However, two days later The Simpsonian reported that Zoom and the college’s IT department were able to verify the IP addresses and MAC addresses used by the individual(s),” and concluded the culprit(s) “is/are not believed to be associated with any faculty, staff or students at Simpson College.”

Asked for an update Tuesday in light of the news report, Cole replied that Simpson “will not be commenting further except to confirm that we have learned the investigation is now being conducted by the Indianola Police Department.”

When The Fix asked Indianola Police for further information, the department’s Brian Sher refused comment, noting “this investigation is ongoing, and has not been resolved yet.”

A Fix query to the Simpson IT department was forwarded to Cole, who reiterated her previous comments.

A professor who witnessed the Zoombombing incident disputed that it could have been perpetrated as a hoax, despite the red flags from the night before: activists’ anger at BLM graffiti being described as “vandalism” and their alleged irritation with Kelliher’s response.

In an email to The Fix Thursday, Political Science Department Chair Kedron Bardwell noted that the IT department had traced the Zoombombing to IP addresses in Minnesota and Kansas.

Asked if the college is offering virtual learning this semester – and if so, whether any Simpson students are learning from Minnesota or Kansas, which are both near Iowa – spokesperson Cole refused to answer either question Thursday. She simply copied and pasted her previous statement.

UPDATE: A Simpson professor contacted The Fix to share his thoughts, which have been added. The college spokesperson declined to answer subsequent questions based on the professor’s comment.

MORE: U. prosecutes student for using Trump as Zoom background