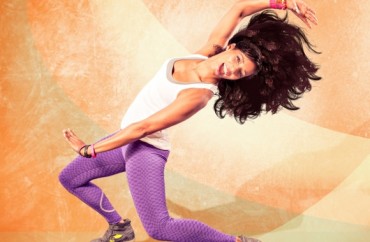 Ok, maybe not three times every week, but as frequently as I get my butt to my local gym — which is regularly — I partake in the glorious, fun, exciting world of cultural appropriation.

At my gym here in Southern California there is a smorgasbord of group classes I take, one-hour fitness regimes in which I bounce, stretch and shake my way to — hopefully — a better body and a healthy lifestyle.

On Saturday, I took a class called U-JAM, described as an “athletic cardio funky dance fitness with world beats and urban flavor.” Our class was led by an energetic gal named Kat, who encouraged us to “put some stank on those moves!” and “get angry at it!”

America, I really tried to put some stank on my booty-shaking and arm pumping, I did. Whether I succeeded or not, well — let’s just say I’m glad none of you were around to judge. But I had so much fun in the attempt. The one-hour class breezed by as me and the other gals and guys moved to the beat.

There is something exhilarating about dancing to hip hop. Burning a few calories along the way is icing on the cake. In that class, at that moment, no one cared about skin color or “cultural appropriation” — we were just a group of Americans from all walks of life having fun.

As I danced, I thought of that young white man at San Francisco State who was accosted by a black peer recently for styling his blond hair in dreadlocks (she accused him of cultural appropriation) and my heart ached a little. Why can’t emulation be a compliment?

Same with the Zumba class I took Thursday. Zumba, if you have been living on Pluto for the last decade, is a cardio-dance craze in which people exercise-dance to Latin-inspired music for an hour.

So there I was, trying my hardest to keep up with the salsa moves and beats. We swirled our arms and sashayed our feet. Some gals in front of me had it down pat. I worked to keep up as our instructor led the way. (Incidentally, she is a black women leading a Latin class, but in the real world, as opposed to college campuses, no one gives a darn).

At one point “La Bamba” came on. As we danced-exercised, I recalled Ritchie Valens (if you grew up in the 80s like I did, chances are you are now visualizing Lou Diamond Phillips in the title role). Valens wanted to get that Spanish-language song to the masses because he wanted to break down barriers, bring Americans together, show them different people can enjoy aspects of all cultures. Luckily, in my Zumba class, no one stormed out in indignation — or worse, tried to shut it down. We swung our hips and smiled the hour away.

In about two weeks, America will mark Cinco de Mayo, a time when we can get together to feast on Mexican food and margaritas and share some good times. I am not sure if you have heard, but one place where Cinco de Mayo celebrations will not be happening in is campus cafeterias across the nation.

Yes, college dining managers have learned their lessons after trying to offer a little festive fiesta time to mark Cinco do Mayo over the last few years and been lambasted as evil, racist purveyors of cultural appropriation thanks to overly sensitive undergrads with (tortilla) chips on their shoulders.

But I digress, back to the gym to work off that burrito.

So what’s my third foray into cultural appropriation? Why, yoga of course! What, haven’t you heard? Student leaders at the University of Ottawa recently canceled a free yoga class because they felt it was “cultural appropriation.” Nowadays there is a trend on campus called — and I kid you not — “decolonized yoga.” I am not sure how it’s any different from regular yoga, and frankly I have no intention of finding out.

Meanwhile, the yoga instructor at my gym closes out the class with “namaste,” and really, no one cares. We just feel more alive and awake after the class than we did coming in, and that’s the whole point.

I hope social justice warriors don’t invade and ruin my local gym. Thankfully, I live in the real world, where capitalism reigns — for now.

Editor’s note: No, the main image used with the column is not me, although it’s sort of how I picture myself looking at my various dance classes.