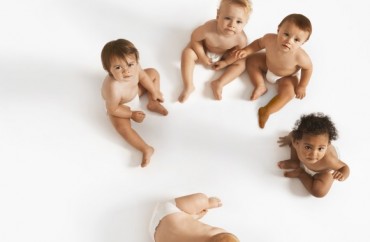 Yes, sadly, this is real life.

The Cornell Review reports on a recent class discussion in which students called infants a bunch of racists.

In an otherwise silent 75-minute discussion for a class (whose name I won’t identify) concerning infants’ social development, the topic was a scientific study about infants’ preference to look at faces belonging to their own race (which, undoubtedly, the majority of the class had not read). I’ll save you the nitty-gritty psychological details, but the basis of the conclusion was that based on these three month olds’ facial preferences, we can infer that they are already racist.

In the spirit of intellectual conversation, one student questioned this conclusion and its implications. The student asked whether a baby’s preference for the face that is the same race as those they see every day really implies racism. Couldn’t it just be a preference for what’s familiar rather than early onset of systematic racism?

Of course, in a class full [of] apparent social justice warriors, this simple question incited an entire off-topic tangent into the nuances of what constitutes racism. While this could easily have been brought to heel by a word from a TA, she instead fueled the fire, questioning any student who did not agree exactly with her definition of racism and bringing the discussion back to racism when anyone brought up other aspects of the study.

Listening to my classmates echo each other’s opinions while throwing around buzzwords and typical concepts such as “media portrayal of minorities” was sorely disappointing. I go to class each day to learn more about the topics that professors and their graduate student teaching assistants have devoted their life to studying, not to sit in the midst of students who would rather be protesting racial injustices committed by three-month olds.

I am not sure what’s worse, the fact that a classroom full of the nation’s supposed best and brightest nearly all agreed that infants are racist, or that the one student brave enough to say “hey, wait a minute here” was given such a verbal lashing.