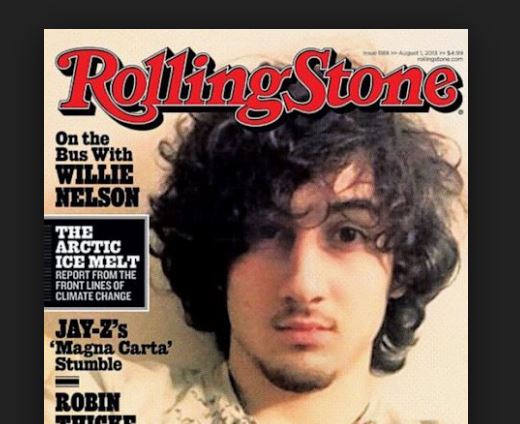 It’s a surprise, but not by too much, considering thousands of young girls across the nation are crushing on the teenage terrorist. (Jahar is their cute little nickname for him, by the way).

Forget journalism or publicity – the decision was likely about the bottom line. The magazine is sure to sell, despite the tens of thousands (estimate) who pledged to boycott the magazine (folks who likely don’t read or buy it, anyway).

Meanwhile, journalism professors debated the appropriateness of the cover in a Christian Science Monitor article:

… There are many, many examples of outrageous figures gracing the covers of magazines, from Adolf Hitler to Charles Manson, says journalism professor Mark Tatge, from DePauw University in Green Castle, Ind.

“The role of media is to inform and provide context for events. To the extent that this story gives us more information about this horrible tragedy, it is valuable,” he says via e-mail, adding that hopefully stories like these will only improve our understanding of what went wrong here so future incidents like these can be avoided. “Choking off or censoring stories like these is not the solution to the problem, nor does it help us move forward as a society,” Professor Tatge adds.

Doug Spero, professor of mass communication at Meredith College, in Raleigh, N.C., agrees that this is nothing new.

“I am a guy of journalistic ethics, and from what I am reading here, this looks like solid journalism,” he says via e-mail. People want to know what was in the mind of a Lee Harvey Oswald, he says, adding that there is a place for something like this “as long as it doesn’t become tabloid journalism.”

This is the kind of stuff that books are written about, adds Professor Spero, why not a magazine?

“This feels very different than, say, a cover story of bin Laden in Time,” he says, adding that whether it is the style of the photo or the simple fact that it’s on Rolling Stone, “it seems to glorify this alleged terrorist. The magazine seems to be romanticizing him as a James Dean rebel and not profiling a mass murderer.”