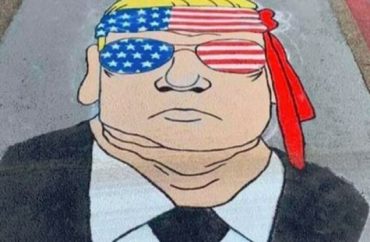 A federal judge has ruled a Louisiana school superintendent and her school board violated a student’s First Amendment rights by painting over his school parking spot — which had included a large mural of President Trump.

Seniors at Pine Junior-Senior High School in the Washington Parish School District are permitted to personalize their assigned parking spot for a $25 fee. Ned Thomas opted to paint President Trump donned in stars and stripes sunglasses and a bandana.

Thomas’s painting was approved by Pine’s principal as the image did not violate the “Senior Paint Your Parking Space” policy. This policy prohibits profanity, lewd images and other students’ names, according to Nola.com.

However, Superintendent Frances Varnado and the school board decided the mural was “too political.” Varnado cited the “divisive” campaign season and claimed the painting “would cause further division and disruption among students.”

She had Mr. Trump painted over with gray paint.

Varnado added her decision was “meant to avoid controversy, not stir it up.” Interestingly, Trump beat Hillary Clinton in the parish by 36 points in the 2016 election.

U.S. District Judge Eldon Fallon, an appointee of President Bill Clinton, wrote that the Trump portrait is the kind of “pure political speech” that is not subject to limitations a school may impose on, say, vulgarity.

“The painting of President Trump cannot reasonably be described as obscene or plainly offensive on its face, nor can it be construed as school-sponsored speech,” Fallon wrote, ticking off other categories of student speech with limits.

To remove it, the judge wrote, the school system would have to show the painting would be “materially disruptive” or confound school activities. But Fallon said he couldn’t make out the disruption in Trump’s face.

The painting, “while it is certainly a stylized and colorful image, depicts the sitting President of the United States,” he wrote. “This is not a case involving a symbol such as a Confederate flag, which has an established meaning as a ‘symbol of racism and intolerance, regardless of whatever other meanings may be associated with it.’”

He ruled that, “ultimately, it is clear that school officials in this case acted based upon ‘an urgent wish to avoid controversy which might result from the expression.’”

Fallon relied on the US Supreme Court decision in Tinker, the 7-2 ruling which established students “do not shed their constitutional rights to freedom of speech or expression at the schoolhouse gate.” Or, in this case, the school parking lot.

Thomas’s attorney said he “understood” the school district will not appeal Fallon’s ruling, and that Thomas plans to have his parking spot repainted next week.