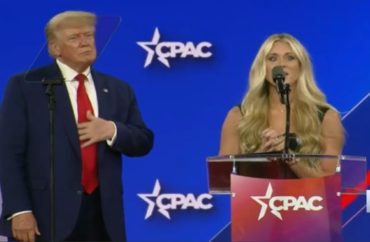 NCAA women’s sports should remain “female,” according to a University of Kentucky swimmer.

President Donald Trump called Riley Gaines up to the stage during his speech at the Conservative Political Action Conference on Saturday.

Gaines has repeatedly criticized University of Pennsylvania swimmer Lia Thomas, who previously competed against men before taking drugs to suppress testosterone, for competing against females. Gaines has also criticized the way NCAA officials have handled the situation – she accused them of mandating that Thomas, not Gaines, hold a trophy for fifth place despite the two tying in a race.

“All I want to say is that it takes a brain and common sense and fifth-grade biology level understanding to realize that this is blatantly unfair,” Gaines (pictured) said. “It’s completely obvious and so I spoke earlier today and I said a lot so I’ll keep it short and I’m just gonna say keep female sports female.”

Gaines gave further comments to The Daily Wire after the Trump speech.

“I would love to see from absolutely anyone who’s willing to give it,” she told the Daily Wire, when asked if she wished President Joe Biden would defend female sports. She told the conservative publication she wants to reach a “broader audience” because “someone who is kind of on the fence or someone who needs to hear some of these things.”

“But it’s really hard because no left wing media wants me or has requested any sort of interview or anything like that, which I think speaks volumes,” she told Daily Wire. “I just want change and I don’t care who’s going to do it, but I think it’s mandatory that it gets done.”