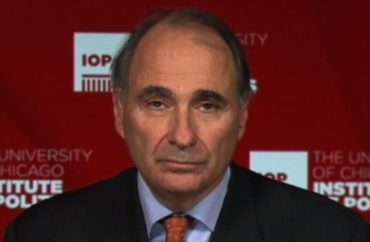 If you want to encourage even more complaining from students who want to shut down any speech than offends them, give them a place in your organization.

The University of Chicago’s Institute of Politics, whose founding director is President Obama’s former senior advisor David Axelrod, is getting dissed by the chair of its own initiative, known as Leaders of Color.

Afreen Ahmed writes in The Chicago Maroon that the institute under Axelrod’s leadership has “create[d] an environment that upholds white supremacy” and “actively erases marginalized voices, effectively shutting students of color out of the conversations and opportunities accessible through the IOP.”

Leaders of Color is a student-led organization that provides yearlong workshops to more than 30 students of color, aimed at increasing access to “leadership positions and public service initiatives” for those students.

But Ahmed, who has participated in the initiative for four years and just graduated from UChicago, accuses IOP of “tokenization” and underfunding the initiative. (It’s not having trouble making up the difference from other campus organizations, including the Office of Multicultural Student Affairs and the Center for the Study of Race, Politics, and Culture, she admits.)

She’s mad at Axelrod and staff for repeatedly promising that “controversial speakers would continue to be invited despite threatening the safety of students of color.”

This meant that LoC had to “prepare our cohort to respond to structural power while protecting their own well-being … the IOP has ignored its responsibility to reduce harm and instead asked us to teach marginalized students how to respond to that harm.”

Ahmed provides a revisionist history of Black Lives Matter activists deplatforming a prosecutor who tried to speak at IOP in 2016.

Activists were mad at Cook County State’s Attorney Anita Alvarez for delaying the release of a video that shows a police officer shooting a 17-year-old, according to the Maroon. (Reminder: Black Lives Matter leader DeRay Mckesson was given an IOP fellowship the same year.)

They had no other choice but to stop Alvarez from speaking, because of the “power imbalance that doesn’t allow students of color to be heard in any other way,” Ahmed says:

Despite the IOP’s insistence that the correct way to exercise free speech is for students to go to events that challenge their viewpoints and ask questions, the entire environment is set up to disadvantage students of color. …  If [black or brown students] ask a question, it requires them to assert the validity of their own existence in a way that is not demanded of white students; and whether their questions are ignored, denied, or answered, their situations after the speaker event remain the same. The power imbalance exhibited in the structure of these events prevents meaningful learning from taking place.

Conducting the IOP responsibly doesn’t mean denying people platforms because others don’t like their ideas; it just means recognizing that extending a platform to a speaker is an offering of power and the opportunity to promote a specific narrative, and that this offering must be given to people who contribute positively to society.

As one commenter on the op-ed notes, “David Axelrod should be given some kind of award for tolerating this group.”

If you want to read more of Ahmed’s pro-censorship blather, there’s plenty more in her op-ed.