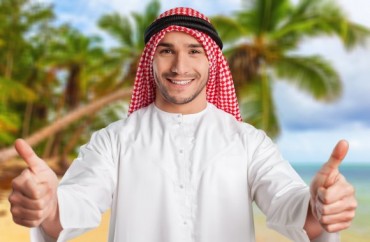 A couple days ago, the dean of the University of Oklahoma’s College of Architecture apologized for wearing “clothing associated with Islam” at an August 20 back-to-school event — because a few people (anonymously) complained to the college president.

Dean Charles Graham says he was trying to be “inclusive” and offer a “nice gesture of diversity.”

Now, Adam Soltani, the executive director of the Oklahoma chapter of the Council on American-Islamic Relations (CAIR), says the dean has nothing to apologize for.

“I, for one, am appalled that anyone would criticize Dean Graham for his choice of clothing, and furthermore, I am concerned that he felt it necessary to issue an apology,” Soltani wrote.

Let’s make one thing clear: If someone was troubled by this from a cultural appropriation standpoint, it definitely was not myself or any other Muslim that I know. While there are certainly scenarios in which donning the traditional clothing of another culture can be appropriating or harmful, the context of this event suggests this was not one of those situations. As an Oklahoma Muslim that constantly faces unnecessary harsh criticism as a result of the faith I choose to adhere to, I commend Dean Graham for taking the bold step to expose his fellow Sooners to a different culture and trying to dispel myths, misunderstandings and possible fears by explaining a component of a foreign culture.

Let’s make another thing clear: If someone was distressed by this from an Islamophobic standpoint, then I am disturbed that the state of Islamophobia in our society has reached a point that someone cannot wear Middle Eastern clothing without being negatively associated with extremists that have nothing to do with Islamic faith. As I write this, I also realize we live in Oklahoma, a state that has seen a vast increase in the vilification of peace-loving Muslims as a result of a rise in Islamophobia.

Soltani is being conditional because the university has not informed anyone as to the exact nature of the complaints against Graham.

Consider: Which sort of complaint would make the school look more foolish? It’s a good question in Oklahoma’s case considering the imbroglio over the SAE frat’s racist chants.

Then again, it could be akin to the “Duke noose” situation.