The Northwestern University student paper last week clarified its decision-making processes when it comes to choosing which op-eds to publish.

Daily Northwestern Opinion Editor Lily Nevo says “there is no cut-and-dry formula for what [the paper] deems worthy to publish,” but there are “some basic guidelines” such as number-of-word requirements, verifiable facts, etc.

For Nevo personally, however, there’s a bit more nitty gritty. She won’t publish anything designed to “generate profit,” for instance. But her remaining “formula” for editing decisions appears to come straight from the critical studies realm.

Nevo is hesitant to publish anything that comes from “those who hold positions of institutional power,” for example. She says “I do not feel comfortable allowing a person in power, particularly of an organization that has previously caused harm to students on campus.”

But what exactly does this mean? Would it be, say, the College Republicans holding a forum about dismantling affirmative action? What about a campus women’s group expressing concern about transgender females dominating women’s sports?

MORE: Northwestern University shows precisely how to not be a journalist

Then there is this:

Finally, we do not publish pieces we deem offensive. Though the line between hate speech and free speech continues to be blurry and we always evaluate pieces on a case-by-case basis, I have come to broadly define hate speech as expression that diminishes an identity-based group or a person holding a specific identity from a protected class. To clarify, an identity in this context is something a person cannot change. To belong to a student organization, to study a certain subject or even to affiliate with a certain political party are not identities protected from criticism. 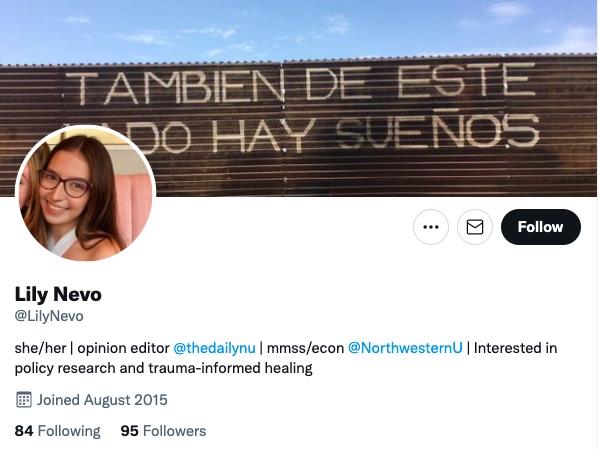 Would it be “hate speech” if a submitted op-ed condemned affirmative action … because it affects blacks’ and other minorities’ identities? What about abortion (women)? Would a piece criticizing the aforementioned transgender female athletes be “hate?” If so, why? After all, if “identity” is “something a person cannot change,” by its very definition “transgender” denotes change.

A D.N. op-ed from the beginning of the month by the student group NU Dissenters (which demands Northwestern financially divest from anything related to “militarism”) specifically mentions cutting ties with the Israeli Defense Forces. Why the singling out of the IDF? Is it OK to criticize Jews because religion is mutable?

(Oddly, NU Dissenters doesn’t seem to have an issue with the university getting millions of dollars from Qatar.)

The College Fix asked Nevo to clarify her editorial judgment processes; she did not respond. Given that, her op-ed archive may offer a bit of insight.