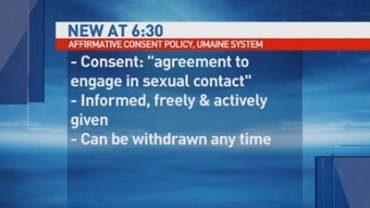 New York Senator Kirsten Gillibrand is pushing to make affirmative consent laws — figuratively known as “only yes means yes” when engaging in any kind of sexual activity — the national norm.

“I definitely have been studying it and looking at it,” she said, adding “I think there’s something there, and I think that is where our debate needs to go.”

“There’s something there …”?? How many more times does the prevailing narrative have to be debunked?

Affirmative consent, often known as “only yes means yes,” is a standard that holds that an individual commits sexual assault if he or she does not receive explicit prior consent for each sexual act committed with another person. This standard is an alternative to the “no means no” standard that prevails in criminal law, where a rape or sexual assault only occurs if a person explicitly refuses their consent, or is incapacitated and unable to either grant or refuse consent.

California law currently requires the standard to be used at all California colleges receiving state money, and several other colleges use it voluntarily. Gillibrand didn’t elaborate on how she would attempt to make the policy a national one, but the federal government could likely force the standard on almost all other schools by adding it to the contents of Title IX, the federal law prohibiting sex discrimination at all schools receiving federal funds.

Gillibrand also used the panel event as an opportunity to try regaining control of the sexual assault narrative. Recently, activists have been hindered by the revelation that Rolling Stone’s bombshell story about a gang rape at the University of Virginia was potentially fabricated, as well as by a Department of Justice report indicating that campus sexual assault rates are far lower than activists claim.

“Regardless of the measure you use … too many rapes are happening on our college campuses today, and not enough justice is being delivered,” said Gillibrand, according to the New York Observer.