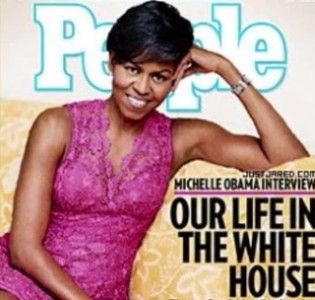 Apparently America is afraid of Michelle Obama’s toned arms, according to the logic of feminists professors.

“The thing about Michelle Obama’s arms is, everybody talks about it. And, they’re fantastic, right? They’re actually her husband’s secret weapon, right? But, they also say something about her femininity that people are not that comfortable with, right? In the way that Hillary Rodham Clinton wears the pantsuit, right, Michelle Obama has got her arms and we’re always a little bit uncomfortable with a strong woman, that’s why her arms are so, so widely commented upon” she stated.

Harris-Perry, who is a professor at Wake Forest University, agreed and took it one step further, talking about how reactions to the First Lady’s arms are racist, too.

I don’t care how many degrees these women have, they are wrong. Michelle Obama’s arms are celebrated and cherished in articles published across this country because she is the First Lady and she looks amazing in a sleeveless shirt, period.

Google it. The top results show page after page of reports on how glorious her arms are, and how to do exercises to get arms like hers. The vast majority of coverage is focused on how good she looks – how is that an indication of a fear of strong women?

These professors are either clueless or politicizing the First Lady’s arms.