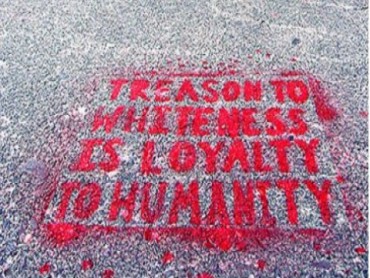 They’re well into “Whiteness History Month” at Portland Community College, “whiteness” being the “academic” term developed in the mid-1990s which, according to PCC Dean of Student Instruction Craig Kolins, examines the “social construct of whiteness.”

It’s a “systemic organizational issue” which “affects everyone,” he says.

Well, thanks for clearing that up!

The various “whiteness” presentations began with a, well, bang when a member of the school’s “multicultural office” took to defending black rapists from … nasty online comments.

Presenter Rut Martinez-Alicea did not appear to be concerned about the actual act of rapes — that is, at least not as much as the focus on the (white) victims’ privilege.

Martinez-Alicea went on to bash another pet concept of the Left — that of  “colorblindness.” Dr. Martin Luther King Jr.’s famous statement about judging on the content of character, not skin color is … “oppression,” she says — a mythical “nirvana place”:

“Part of whiteness and part of systems of oppression is to say ‘what is best is not see difference’… When we don’t see difference, we’re missing out a lot of information. We’re also denying the consequences of difference. So when we engage in comments or behaviors that are informed by this [value?] of colorblindness, we’re engaging in bias.”

If you say that you’re not a racist, Martinez-Alicea would respond “Well, you must be traveling from a very different time.” (I’ll leave it to you to decipher what she means by her subsequent “this [sic] icebergs of oppression and subordination” remark.)

This past Wednesday one of the highlights was the presentation by Harriet and Charlotte Childress which dealt, in part, with the National Rifle Association and mass shootings.

The lecture title: “The Accumulation Effect: The national response to PCC’s Whiteness History Conference grew out of the accumulated effect of generations of hierarchy-busters. Learn simple powerful methods to keep progress for social change/social justice growing exponentially.” There’s a mouthful!

The latter Childress, like her sister a “chemistry and engineering instructor” at Lane Community College, wastes no time snidely chiding the NRA by referencing an article she and her sister wrote for the Washington Post. Regarding the aftermath of the Sandy Hook Elementary School shootings, she asks, “Really? We’re asking the NRA what they think? What we should do?”

Childress frames the issue as one of “hierarchy.” One of the first slides in her PowerPoint presentation claims that, “using multiple hierarchies,” the NRA’s authority was due to their “position on top,” and not from any actual knowledge they had on the subject.

In addition, she asserts that the NRA utilizes a “white male perspective,” but claims to represent everyone.

One may wonder how much those in attendance actually got out of the presentation given Childress’ numerous, quickly-cut off “OKs,” her mumbling, and even the little dance she does towards the end of the clip below:

In her presentation, sister Harriet discusses how conservatives (or the “hierarchy conservators”) constantly need to move farther to right in order to keep “the [political] see-saw in balance.” The farther these “conservators” move, Childress argues, the “more clueless” they become. (She contends that Donald Trump and Ted Cruz are “far out there on the right side of the see-saw;” apparently she hasn’t been paying much attention the last few months to the many conservatives who claim the former is anything but “far out there on the right.”)

The presentation goes on to describe a sort of “hierarchy pyramid,” which basically regurgitates the (stereo)typical “privilege” arguments typically encountered at academic “trainings.”

And, because he can use all of ten of his fingers, he is higher on the “body hierarchy” than “his cousin who was born with three fingers on one hand …”

Those who have a low BS tolerance can hope, perhaps, that those in attendance were as seemingly interested in these riveting exhibitions as the student seen downing a meal in the last video clip.

The sisters Childress have a website, not-so-ironically titled “Clueless at the Top.” What’s interesting is that, despite what they’ve actually taught and received grants for — pharmacy, engineering, math, physics, chemistry, science, technology, and engineering education — they give lectures on social and political science.

(The College Fix’s Michael McGrady contributed to this report.)