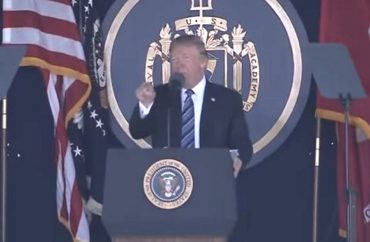 Trump started the speech by praising the men and women for choosing the United States Naval Academy, telling the 1,042 grads “you chose the path of hard work, sweat, and sacrifice. You chose the life of honor, courage, and commitment. You chose to serve the nation and defend our great American flag.”

He also cited the nation’s current effort to rebuild the United States military, and added “we are witnessing the great reawakening of the American spirit and of American might,” reports The Atlantic, which transcribed his remarks.

Trump’s speech not only praised the class of 2018 for its impressive accomplishments, but included observances for America’s military heroes, including retelling a story of valor:

Seventy-five years ago this summer, he was in the South Pacific commanding Bombing Squadron 102 during the battle of the Solomon Islands. That was a rough battle. His only brother had been killed and the Bataan Death March. On July 6, Bruce volunteered for a mission to destroy a crucial enemy base. It was a rough time. It was a rough, tough situation. He knew full-well that he would likely never return. He knew he was going to die. But he also knew his daring action could prevent a surprise attack on large-scale American forces.

So, his plane took off alone on a 700-mile flight. Bruce flew through the darkness to his target, a tiny speck on the vast open sea. He braved unrelenting anti-aircraft fire, like nobody had ever seen at that time, and a trail of enemy planes to single-handedly destroy this large enemy base, including multiple fortifications, and a critical communications link. And in this final act of valor, Bruce was caught in the blast of one of his own bombs and perished in a remote lagoon very far from here. His life was lost, but his legacy will live forever.

Trump went on to give the grads a “Braveheart” moment, praising their grit:

You will bring comfort to our friends and strike fear into the hearts of our enemies. Among our graduates today will be 283 naval aviators, 134 submariners, 256 surface-warfare officers, 70 restricted-line officers, and 15 explosive-ordnance-disposal officers. Two-hundred-and-thirty-six United States Marines, and 35 very tough, very well conditioned Navy SEALs.

Together, you are the tip of the spear, the edge of the blade, and the front of the shield defending and protecting our great country. You know, there is no mission our pilots can’t handle. There is no hill our Marines can’t take, and there is no stronghold the SEALs can’t reach. There is no sea the Navy can’t brave, and there is no storm the American sailor can’t conquer. Because you know that together, there is nothing Americans can’t do. Absolutely nothing.

The president also defended and praised the United States of America: