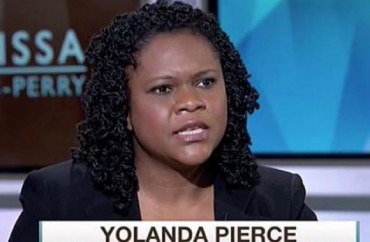 “We can’t dismiss this as an anomaly or aberration,” she continued regarding Roof, who authorities say admits to killing nine people in a historically black South Carolina church. “I even don’t like when we say this was a senseless crime. It makes perfect sense, right?”

“Racism in this country is as ubiquitous as rain. And so it actually makes perfect sense,” she continued, as reported by Breitbart. “So instead of saying, ‘This is a lone wolf or someone we can’t imagine,’ he told us why he did what he did and he told us who he hated and he told us why. We have to take that seriously so we stop thinking, ‘Oh, this is just an individual and it won’t happen again.’ It happens with great degree of regularity. It’s broken, our systems are broken. Our institutions and our structures are racist.”

On her personal website, Pierce introduces herself by stating: “I am not interested in most conversations about equality. To whom would you like to be equal, given a broken and morally bankrupt system? Do you want to be equal to the persons, forces, and systems which generate the very terms of your oppression? I am, however, interested in the weightier matters of law: justice and freedom. How can we act justly, love mercy, and walk humbly?”

According to her faculty bio, “her book ‘Hell Without Fires: Slavery, Christianity & the African American Spiritual Narrative’ argues for the existence and retention of certain African religious practices and ceremonies in slave culture, and the transformation of traditional Western Christian practices by enslaved people.”