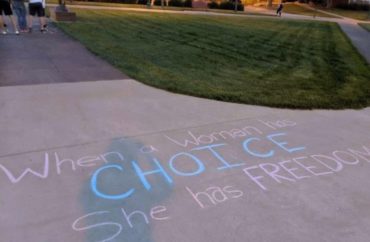 Pro-life messages chalked on campus sidewalks are often the target of vandalism. Sometimes the vandals strike overnight, while other times they act out in the open.

In at least one case, a taxpayer-funded university appeared to violate its own policies by directing maintenance staff to erase the chalking.

Another case popped up last month at the University of South Dakota, which is subject to a new campus free speech law.

What makes it stand out: The abortion-rights student group on campus has denied responsibility for the vandalism, but its statements are so curiously worded that they suggest the group knows the identity of the vandals.

Yotes for Life accused Students for Reproductive Rights of trying to “remove our chalk” when SFRR chalked its own messages on Sept. 19. “Should they face sanctions from the University for violating free speech?” it tweeted.

The pro-life group again accused its opponents of “attempt[ing] to remove our chalk from the sidewalks” in a statement to campus newspaper The Volante: “We call on USD President Sheila Gestring and the Student Government Association to stand up for students’ rights to free speech and take public action.”

When The College Fix asked Yotes for Life what evidence it has that points to SFRR as the culprit, it provided a photo (below) that it said SFRR posted but had since taken down.

It shows a newly chalked pro-choice message in the foreground and a few students standing on what YFL claims is their pro-life chalking in the top left corner. YFL says it depicts a student “using their foot to erase one of our chalkings,” though it’s hard to tell what they’re doing by the photo alone.

YFL said it hasn’t shared the photo with the administration as evidence of vandalism, but that it’s talking to Students for Life of America about its options.

SFRR’s statements to The Volante and The Fix are notable for what they leave out and their emphasis on speaking for the “organization.”

The pro-choice group told the campus newspaper that “any act of chalking over or defacing the YFL work be in direct contradiction to the values our organization holds to its core,” including belief in “open dialogue and respectful discourse”:

Erasing their chalk hinders the process of democracy and impedes on the values of freedom. We do not condone the behaviors regarding the defacing of chalking; however, any student actions outside the purview of SFRR cannot be reciprocated as the actions of the organization.

It shared the same statement on its Facebook page.

In a post Sept. 20, now pinned to the top of its Facebook page, SFRR again spoke as an organization: “[W]e peacefully chalked next to those [messages] that other groups did and did not ask anyone to wipe away either side’s messages.”

In a blog post Friday, Students for Life of America speculated that “[p]erhaps the vandals and the abortion group crossed paths on their way to and from harassing YFL’s project.” That would explain SFRR’s statement that both denies vandalism and takes credit for chalking new pro-choice messages.

SFLA also found it odd that the pro-choice group had “before and after” photos that it shared with the campus newspaper. (An unknown vandal erased both sets of pro-life and pro-choice chalking after SFRR’s responsive chalking.)

The Fix asked SFRR whether it knew who vandalized the pro-life chalking, or if someone tipped off the pro-choice students about the targeted vandalism, given that it has “before and after” photos.

The wording of its statement to The Volante leaves open the possibility that one of its own members could have defaced the YFL chalking without the knowledge or approval of the group as a whole.

Asked to confirm that none of its members vandalized the pro-life chalking, and shown the photo that YFL claims was posted and taken down by SFRR, the pro-choice group provided The Fix another carefully worded statement:

Our organization does not condone any behavior that would infringe on an individual’s right to free speech. Our mission on campus is to campaign for intersectional women’s choice and health rights. We hope to increase awareness of and interest in women’s abortion rights and reproductive issues and seek to combat misinformation by providing medically accurate information.

We have no more comments about this issue.

It pointed The Fix to its statement to the campus paper. SFRR has not responded to a Fix followup asking to confirm that it is not answering whether the group knows who vandalized the YFL chalk.

The Volante noted that the South Dakota Board of Regents policy manual bans members of the community from “obstruct[ing] or otherwise interfer[ing] with the conduct of the institutions or the freedom of others to express views they reject or even loathe.”

University media relations has not answered a Fix query about whether it’s investigating the vandalism as a violation of the policy manual, and whether the photo provided by YFL is relevant to claims against SFRR or any possible suspect.

IMAGE: Courtesy of Yotes for Life