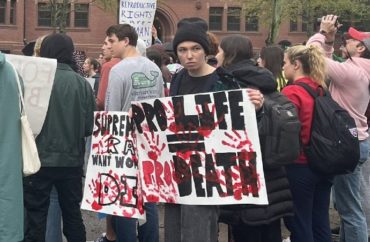 Pro-life and pro-choice activists at Harvard rallied on Wednesday in support of their position in light of a leaked draft opinion from the Supreme Court that would reverse Roe v. Wade.

The 1973 Supreme Court decision legalized abortion in all 50 states. Supreme Court Justice Samuel Alito and four other justices are reportedly ready to reverse the ruling and return the issue back to the states.

But according to Harvard abortion activists, supporters of the abolition of abortion are “Pro Death.”

At Wednesday’s rally, abortion rights protesters held signs that bore the phrases ‘Pro Life = Pro Death’ and ‘Reproductive Rights are Human Rights.’ Some students delivered speeches sharing their frustration and anger at the possibility of Roe v. Wade being overturned.

“For basic humanity, for the future of our nation, we must raise our voices and make sure our government knows that this is not what we want,” Hea Pushpraj said at the rally. “We must all stand together to ensure federal protection and to make sure more states cannot follow Oklahoma and Texas.” Both states have laws that prohibit abortions at six weeks when a heartbeat can be detected.

Harvard Right to Life meanwhile countered with signs that stated “The Future is Anti-Abortion” and “Pro-life is Pro-Woman.”

“A lot of people have never really encountered other pro-life students or students who are willing to say that they’re pro-life on this campus,” Harvard RTL co-president Olivia Glunz told the student newspaper. “It’s really important to say that we have a reason for what we believe, that this is a really beautiful message that we want to create a world in which every single human life is valued.”

Other student activists have rallied in support of abortion. Last week, hundreds of University of Wisconsin Madison students rallied against the potential reversal of Roe v. Wade