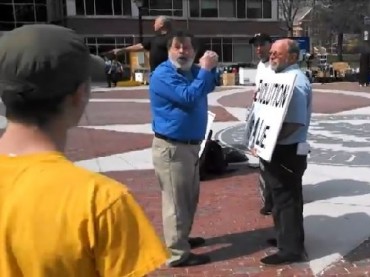 A University of Connecticut anthropology professor who angrily confronted a group of evangelical demonstrators in a profanity-laced tirade before leading students in a “Praise Darwin” counter-protest chant has defended his actions as morally justified.

“It was my moral duty to become outraged,” Professor James Boster told NBC Connecticut on Friday, just a few days after a video of the confrontation was posted on YouTube. It quickly went viral. (Video posted below.)

In the 2-minute video, Boster gets nearly nose to nose with a demonstrator holding a sign that reads “Evolution Is A Lie” and yells “bullsh*t, bullshi*t, you are full of ignorance and lies,” among other comments.

Later in the video, which does not show what originally set the professor off, Boster rallied a small group of students to join him in a counter protest.

“Praise Darwin,” he called out.

“Praise Darwin,” the students replied in chorus, their arms raised.

“Your place in the divine pattern of life, tree of life, where you feel your spiritual kinship not just with your fellow humans but also with your fellow mammals…” Boster continued. “We are all bonded together in that great spiritual web … that understanding will nurse you and sustain you.”

Boster told NBC Connecticut that the protestors denigrated the ethnicity and sexuality of some students in the vicinity, and that’s what enraged him. He also said the protestors’ claim that evolution is false did not actually bother him. He insisted he was trying to “engage them as cast members” in the “drama” he said he was “creating.”

Peter Wolfgang of the Family Institute of Connecticut told NBC Connecticut he has a problem with “the professor proselytizing the students for a particular spiritual philosophy.”

Last year, an assistant football coach at UConn was forced to resign after the university publicly decried his recommendation that “Jesus Christ should be in the center of our huddles.”

“UConn came down on him like the wrath of God,” Wolfgang said.

The University of Connecticut has issued a statement regarding Boster’s actions, saying “everyone has the right to exercise free speech on our campuses.”

The statement also condemned the confrontational nature of Boster’s profanity-laced comments, saying the school expects professors to “act in a way that promotes civil discourse and to express themselves respectfully.”

Boster told NBC Connecticut that he is in “deep trouble” and that the dean has “summoned him” to his office.

According to the popular website “Rate My Professors” – which college students often use when choosing classes – Professor Boster is not very popular, and it’s not unheard of for him to get animated in his classroom, either.

Many said he “rants” often, and gets “side-tracked” in class.

“He rambles in class and almost never talks about the material. He’s always off on a tangent,” one student wrote.

One even insisted that students can periodically skip class, and that the TA was more informative than the professor.