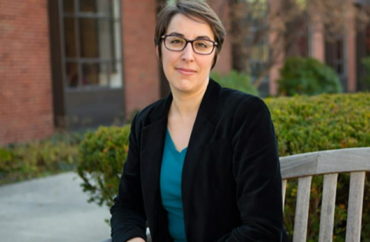 The sociology professor who would only call on whites, men and the “privileged” after other options were exhausted has ended up resigning her position.

The practice, called “progressive stacking,” gives “minority voices” first priority. Binghamton University’s Ana Maria Candela had spelled out in her syllabus that she would use the procedure in class.

“[I]f you are white, male, or someone privileged by the racial and gender structures of our society to have your voice easily voiced and heard, we will often ask you to hold off on your questions or comments to give others priority and will come back to you a bit later or at another time,” the syllabus read.

Earlier this year the university reportedly made Candela (pictured) remove the policy from her syllabus — which led to a campus protest. Candela told those assembled at the demonstration that the support she received shows policies like progressive stacking remain necessary.

Sean Harrigan, one of Candela’s white male students (who also happens to write for Campus Reform) ended up filing a Title IX complaint about the progressive stacking, saying “How am I supposed to get a full participation grade if I’m not called on because of the way I was born?”

A few weeks ago, Professor Candela “quietly” tendered her resignation from Binghamton U, the student paper Pipe Dream reported.

Candela told the paper she had been “treated with such callous disrespect by members of the administration, [the] media and public relations and by a student in my course that to continue to contribute my labor to the institution would involve a profound lack of self-love and self-respect.”

Kenyon Cavender, a teaching assistant (TA) in the course and second-year doctoral student in sociology, said Candela’s resignation would come at a cost for the department.

“Sociology is not a huge department,” Canvender said. “It’s an absolute loss for our department and it’s felt. We know why she resigned and understand, and are sad that she’s gone. We lost a really good scholar due to this situation.”

Canvender and other TAs raised the issue of privacy in their criticism of the University’s alleged lack of support, as they — along with Candela — had their names and office numbers included in the syllabus posted in the Campus Reform article. In April, Campus Reform had published another article on the class, this time publishing emails between Harrigan and a TA who required masks to be worn after the mask mandate had ended.

BU Graduate Student Employees Union Representative Emily Blakely said Campus Reform “represents a real threat” because those on whom it reports “are unwillingly subjected to racist hate speech and threats of harm.”

Adam Tartasky, a student in Candela’s course, ripped Harrigan for going to “the local conservative tabloid media” and said despite his “broadly unpopular comments” Harrigan actually was called upon in class “routinely.”

But biochemistry major Danyal Shah said the progressive stacking clause never should have been in the syllabus: “I can understand that [Candela] might want to hear more unique perspectives in discussion, but the policy didn’t need to be outlined in the syllabus. It sounds like a common unwritten rule that a lot of professors use.”