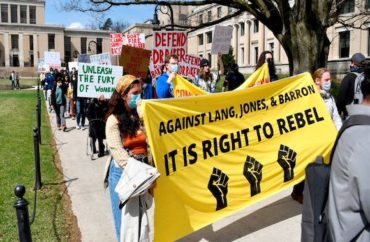 Professor had been cleared of wrongdoing by the courts, but PSU is proceeding with dismissal proceedings

A far-left student organization at Penn State University last week marched through campus to protest the possible firing of an English and African American Studies professor, and used the opportunity to rant about U.S. imperialism, racism and other alleged maladies.

On Thursday, PSU’s Students Against Sexist Violence “backed up traffic for blocks” during its march, demanding the university back off from its actions against Professor Oliver Baker, Centre Daily Times reports.

Baker got into trouble last summer during a pro-vaccine event when he attempted to snatch away a counter-protesting student’s sign (below). A scuffle ensued, leaving the student with a bloody nose. Baker initially was charged with simple assault, disorderly conduct and harassment, but the first two eventually were dropped and he was found “not guilty” of the third.

This did not deter Penn State from its own proceedings, however. The Chronicle of Higher Education notes “it’s safe to assume that what administrators see when they watch th[e] clip is someone interfering where he shouldn’t have.”

A rally led by Penn State faculty and students asking for a COVID 19 vaccine mandate turned physical this afternoon at Old Main. A counter protester was present. Words and shoves were exchanged between the two sides.

Thursday’s pro-Baker demonstration included approximately 70 people (several faculty among them) and lasted about two hours. Like Antifa, organizers “wore sunglasses and handkerchiefs covering their faces,” carried banners reading “It is right to rebel” and “Defend Dr. Baker!” and “urged students to ‘walk out’ of class,” according to the report.

Speakers whose identities were obscured and who didn’t introduce themselves led the crowd in a number of chants, such as, “Penn State people, give them hell! It is right to rebel” and “All support to Dr. Baker!” They handed out papers on how to contribute to Baker’s legal defense fund. They named the counter-protester from August, accusing him of racism and labeling him a “threat.” And, at one point, another masked organizer pointed out a man in a green shirt and told the crowd he was an “enemy” and to make him feel uncomfortable. He soon left.

The message didn’t always remain on Baker. After leaving the library, the crowd briefly stopped at the Willard Preacher [see here] and shouted, “Bigot!” and “Racist!” …

At the Allen Street Gates, speakers mentioned varying topics such as U.S. imperialism and how the Reserve Officers Training Corps teaches people to kill Black and Brown minorities […] “We see it as an interconnected struggle,” one member told the CDT, explaining Baker is a lightning rod of sorts when it comes to institutional problems.

PSU’s student paper the Daily Collegian reports Students Against Sexist Violence has its own “security team” which “escorted out” from the event two “alleged instigators.” One of those “instigators” told the D.C. he actually supports SASV, but doesn’t like how it “accuse[s] anyone of being a fascist for some reason just out of nowhere.”

He added “I guess I wasn’t chanting in the right way.”

According to his faculty page, Baker’s (left) areas of research include “critical ethnic studies, nineteenth-century American literature and culture, critiques of racial capitalism and settler colonialism, and histories of African, Native, Chicanx, and working-class liberation movements.”

MORE: Penn State defends assignment asking students to ‘explain why the Taliban is not a terrorist organization’