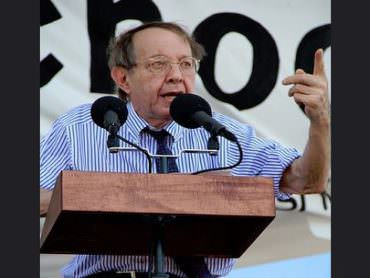 The author of numerous books on education and teaching including “Savage Inequalities” and “The Shame of the Nation,” Kozol assailed modern out-of-control standardized testing culture in American classrooms, as well as the continued expansion of charter schools:

“Dr. [Martin Luther] King [Jr.] did not say I have a dream that someday the states in the North and the West and the East and the South will have anxiety-ridden, test-driven, rigidly-disciplined, poorly-operated, slightly-higher scoring, separate but equal schools,” Kozol said, to applause from the audience, about a quarter of whom were classroom teachers.

Kozol explained that there is no evidence that charter schools are on average better than public schools. He acknowledged that exceptional charter schools exist, but many of them have selectivity bias toward enrolling more motivated students. These charters also tend to “counsel out” kids that do not meet expectations and are more deeply segregated.

“People who send their kids to private schools are subtracting themselves from the public struggle and are diminishing their civic virtue,” he added.

Kozol then segued to a story of having dinner with some wealthy liberal friends who fork over $120K annually to send their kids to private school: “They’re nervous with me because they’re afraid I’m going to redistribute their wealth, which I do,” he said (emphasis added).

The author also recounted his time over 40 years ago as a substitute teacher in a “broken-down” inner-city Boston school — the details of which were told in his book “Death at an Early Age.”

“I was fired for curriculum deviation,” he said. And indeed he was. He had opted to read the poems of Robert Frost and Langston Hughes to black students, and as City Journal’s Sol Stern notes, the incident “gave the first-time author advance publicity and instant credibility.”

“Death at an Early Age,” Stern writes, “engag[es] the reader with flesh-and-blood characters and tales of good and evil inside a school that Kozol paints as a racist hellhole.” But other than the author himself, “not one white adult […] exhibits a flicker of sympathy for the black children or teaches them anything useful.”

And here’s an interesting tidbit: Those other white educators in the book … did not exist:

“With the exception of certain named public figures, characters in this book do not have counterparts in real life,” Kozol acknowledges in a “Note to Readers.” “Nevertheless, important attitudes, character traits, acts or stated viewpoints ascribed to faculty, administration and pupils in this book accurately reflect the author’s experience in the Boston Public Schools.”

That little nugget didn’t make it into Kozol’s talk at Duke, nor did a discussion of another of his books, “Children of the Revolution,” Kozol’s account of his mid-1970s sojourn to Cuba.

In the book he writes:

“[S]omething here is really different […] There is a sense of shared achievement, of hard work that remains . . . one good notch below the level of competitive obsession”—unlike capitalism’s dog-eat-dog way of life. The school is “able to combine . . . a reverence for productive labor and an impressive level of true humanistic education of the whole man and the whole woman.”

A fawning reverence to the Communist “New Man” ideal? It sure seems that way. (The Cuban government had officially invited Kozol to visit, by the way.)

Perhaps the closest equivalent to this Kozol utopia has already been attempted beginning in the late 1960s and early 1970s: forced busing. The results are wanting, to say the least, and the greatest example may be the Kansas City experiment. To put it another way, Kozol snatching up his dinner guests’ tuition cash to redistribute it wouldn’t have mattered.

What should be alarming for teachers “in the trenches” is Kozol’s contention that educators should make the most of their position and be progressive agents of change. His book “On Being a Teacher” features chapters such as “Disobedience Instruction” and is dangerous, City Journal’s Stern says, “particularly [for] minority children”:

[S]uch teachers are almost never much good at imparting basic skills, because they almost always embrace the ed schools’ latest progressive pedagogical fads. The young teacher who feels compelled to parade before her fourth-graders every one of Columbus’s depredations against the Arawaks is also likely to believe that standardized tests are bunk, that math and reading should never be taught through drill, that children need not be taught “mere facts,” and that the very idea of literacy is merely a Western conceit.

Kozol gets warm welcomes on American campuses (education schools)  because — surprise — they overwhelming share his political views. But the question remains: Do his ideas actually improve the lives of those who are the subject of his continuing sympathies?

How does denying choices for (minority) children — private and charter schools — help their educations? How does engaging in Paulo Freire-esque “liberation” pedagogy help kids to master reading, writing and arithmetic? How does excusing bad, and even criminal, behavior enable poor/minority children to lead productive lives in and out of school?