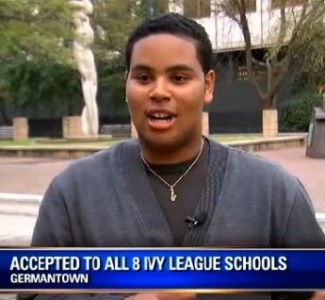 It’s easy to see why Nelson got into UA’s honors program and every single Ivy League school. As a student at Houston High School in Memphis, Tennessee, he has a 4.58 weighted GPA, has taken 15 AP courses, and achieved a 2260 out of 2400 on his SAT and a 34 out of 36 on his ACT. He’s the senior-class president of his high school, a National Merit Scholar and National Achievement Scholar, and a state-recognized alto saxophone player.

Despite his achievements, Nelson did not receive a performance-based scholarship from the Ivy League schools. None of them offer merit scholarships …

After some thought and consideration of all the schools’ offers, Nelson decided it wouldn’t be worth the financial strain to [take on so much debt] on his undergraduate education. He plans on going to medical school after college, and knows he’ll be faced with more tuition costs. …

“The Ivy League experience would certainly be something amazing, to make these connections, and have these amazing professors,” he said. “But I really do think I’ll be able to make the same experience for myself at the college I chose.”

Wow – great attitude, great perspective and great decision. Good luck to Ronald Nelson, and congrats on making a decision that helps you avoid a mountain of debt.