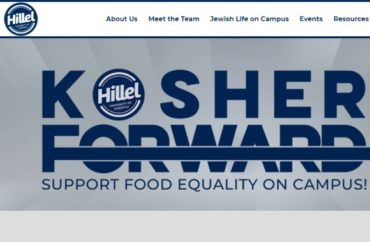 The Hillel chapter at the University of Toronto is campaigning for kosher food options on campus as an “equality” measure.

The only group with a “dietary restriction or need” that is not currently served is Jewish students who want to follow Jewish dietary requirements, it argues.

When a Hillel member asked the external commissioner of the public university’s Graduate Students’ Union, Maryssa Barras, about getting its imprimatur on the kosher campaign, the official responded both skeptically and cryptically.

Because Hillel advocates “pro-Israel” positions, “the Executive Committee strives to abstain from this type of discourse in order to ensure the will of the membership is actively reflected in any votes on these motions,” Barras wrote Nov. 11, according to an accusatory letter from the Hillel chapter. She chairs the Equity and Advocacy Committee.

The backlash to the sentiment conveyed by Barras was apparently enough to convince the GSU to remove officials’ names from its leadership page over the weekend. Google’s cache shows they were still listed as of Saturday, and it continues to identify her by name in excerpts for the page. Barras has also marked her Twitter profile private since Nov. 13 at the earliest – two days after her response letter.

It’s not clear what Barras meant by “the type of discourse” and “will of the membership,” Hillel wrote Friday.

If the latter means not supporting a religious minority’s campaign for “food they can eat” on campus, the union is violating its mandate to “represent the interests of minority groups”:

The attempt by this student body to change the conversation away from the needs of Jewish students to their support for the Jewish state is a blatant attempt to marginalize Jewish students connected to Hillel simply for their identity.

Hillel noted the union officially endorses the anti-Israel boycott, divestment and sanctions movement, which leads it to conflate Jewish students’ needs with their views on Israel. This “amounts to denying Jewish students university services due to their potential political beliefs” and is “a form of anti-Semitism.”

Why not boycott ‘apartheid state’ of India as well?

The GSU Executive Committee responded in a Sunday night statement that named neither Barras nor the Hillel member, except to say that the latter serves on the union board of directors. (Hillel did not identify its member as a union leader, simply a “graduate student leader,” and no media outlets appear to have identified the member.)

It adds procedural details that contextualize the response of the “external commissioner.” Beyond asking for the union’s support for the Kosher Forward Campaign, the board member asked Barras if the Executive Committee could present the motion at the Nov. 26 General Council meeting.

The Executive Committee apologized for the “harm” that the external commissioner’s response has caused to Jewish students. It “has reached out” to both Hillel and the board member “to discuss how to remedy harm and how to mitigate future harm towards Jewish students on campus.”

The response did not satisfy commenters on the GSU Facebook page. In a comment with 30 “likes” as of Monday afternoon, one wrote that Barras’s words were “blatantly anti-Semitic” and “completely in line with your position on BDS … You are so deep in BDS that you can’t see your own prejudice.” The commenter implied the GSU was breaking Ontario’s Human Rights code as well.

Another asked why the GSU would “not immediately support providing any and all foods required for religious or ethical reasons by U of T students?” The commenter sarcastically suggested banning Indian foods and products from campus because “India is a Dalit apartheid state,” referring to caste discrimination against so-called untouchables.

About an hour after the GSU statement went up, Hillel responded by thanking the GSU for the apology but saying it “does not address the antisemitic nature of their original response.” (The union has steadfastly denied that Barras speaks for the union leadership.) “This is the core issue that must be discussed and we look forward to doing so directly in conversations with members of the Executive Committee,” Hillel wrote.

The Jerusalem Post reports that B’nai Brith Canada has asked the University of Toronto to denounce the GSU’s alleged stance on the Kosher Forward Campaign. It also asked that an earlier complaint against the union’s BDS committee – made permanent as of this spring – be processed “in a timely manner.”

B’nai Brith Canada CEO Michael Mostyn said the GSU “has been permitted for years now to cultivate a hostile attitude toward Jewish graduate students at U of T” and the university administration must respond with more than “fine words.”

The Post says the University of Toronto was the first in the world to host Israeli Apartheid Week, an anti-Israel series now hosted annually at schools around the world.

MORE: Student union president would like to ‘oppress white people’