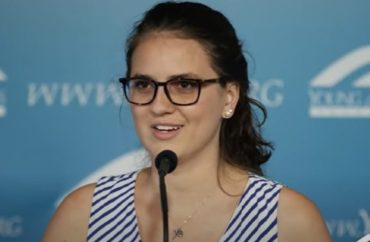 The co-author of a new book on abortion in America shares her ideas on what should come next after Roe.

A pro-life scholar and former College Fix reporter recently co-authored a book called “Tearing Us Apart: How Abortion Harms Everything and Solves Nothing” with Ryan Anderson.

Anderson is the president of the Ethics and Public Policy Center where Alexandra DeSanctis (pictured) is a visiting fellow.

DeSanctis spoke to The Fix about what should happen on college campuses in a post-Roe America. Regnery Publishing provided a copy of the book.

“Pro-life students should certainly lobby their campus administrations to craft policies that support mothers and fathers who are also students,” DeSanctis told The Fix when asked for ideas on what pro-lifers should push for on college campuses to support pregnant students and families.

This could take many forms depending on the type of school and its size: student housing options that accommodate families, health-care options that offer robust prenatal care and delivery care, assistance with child care so that students can finish their degrees, and generous maternity- and paternity-leave options that allow students to adapt to parenthood without missing out on their education, to name a few. It is also good for pro-life students to get involved in their own projects to help pregnant mothers and new parents, including organizing things like baby showers or student-volunteer babysitting programs.

The Fix next asked DeSanctis how pro-lifers can stop efforts like the University of Michigan’s plan to push abortion through its post-Roe task force and laws like those in California that mandate distribution of RU-486 drugs.

“One option when it comes to state schools is to lobby for legislation that makes it more difficult for schools to create these sorts of policies,” she suggested. “At private institutions, the best pro-lifers can do is register their disapproval for the policy. Another point to highlight is any discrepancy between a school’s support/funding for abortion and their support for students who are parents.”

“It is definitely important for legislators to consider how colleges and universities are complicit in abortion, especially if they are breaking state and federal laws related to fetal-tissue trafficking,” she told The Fix, when asked about punishing universities that promote or facilitate abortions. “Preventing schools from favoring or funding abortion will be an important goal for pro-life lawmakers across the country moving forward,” she said.

She is optimistic that pro-life and pro-abortion groups can work together.

“There is a lot of room for agreement and cooperation between pro-lifers and abortion supporters when it comes to assisting pregnant women and new parents,” DeSanctis told The Fix.

“Some abortion supporters might not want to form those alliances, but many are actually ‘pro-choice’ in the sense that they want to help mothers and fathers in need,” she told The Fix. “[S]o there’s definitely space for reaching across the aisle to get it done, especially in the college context.”

“Tearing us Apart” is a worthwhile read for anyone that wants an overview of different facets of the issue of abortion.

It discusses the legal history behind Roe v. Wade and the consequences of abortion on American culture and politics.

The pair also consistently argue that the goal of the pro-life movement should be abolishing abortion, even if it takes an incremental approach.