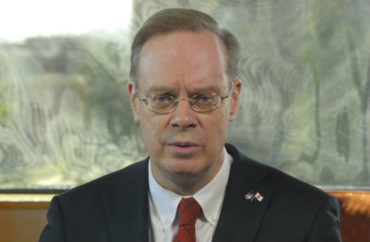 Lawyer: ‘We believe this was done to justify the hold on the students’ transcripts’

Syracuse University is not letting up on 18 students it has charged with threatening “the mental health or safety or anyone” and “words or video that go beyond the bounds of free speech” for their acts in leaked satirical videos.

Even while the lawsuit against the university by five Theta Tau pledges and members forestalls their punishment through final exams, Syracuse has offered most of the charged brothers at least one year’s suspension, and expulsion for the rest, one of their lawyers told The College Fix.

“The U has since served additional notice on the students advising them they are now facing sexual harassment/assault/failure to prevent same charges under Title IX,” Smith Sovik lawyer Karen Felter wrote in an email Tuesday:

The private university’s designated expert on free speech, who fought against Syracuse’s previous punishment of student satire years ago, told The Fix he’s not ready to judge the propriety of the disciplinary proceeding until it plays out.

‘Responsible as a group for harassment’ because others felt ‘afraid’

Syracuse has received a steady stream of bad news since it promised “legal” action against the students the same day it learned of the videos made during a Theta Tau “roast” ceremony.

The district attorney refused to prosecute the students, contradicting the university’s claims that their behavior was potentially criminal.

Both the Syracuse Theta Tau chapter and the national fraternity have characterized the sexually and racially crude language and behavior in the video as satirical skits, not their “seriously held views.”

The five students’ First and Fourteenth Amendment lawsuit against the university, which seek $1 million in damages for each plaintiff just for defamation, claims the administration willfully misrepresented them as racists, sexists, homophobes, anti-Semites and “hostile to people with disabilities.”

According to lawyer Felter, the fraternity members “have received death threats and been doxed.”

She told The Fix that two “upper class members” of Theta Tau and 16 pledges “involved in the skits or present” have already been told they’ll be expelled or face lengthy suspensions.

They have attended “preliminary meetings” with Pamela Peter (below), case manager in the Office of Student Rights and Responsibilities and a defendant in the lawsuit, according to Felter. 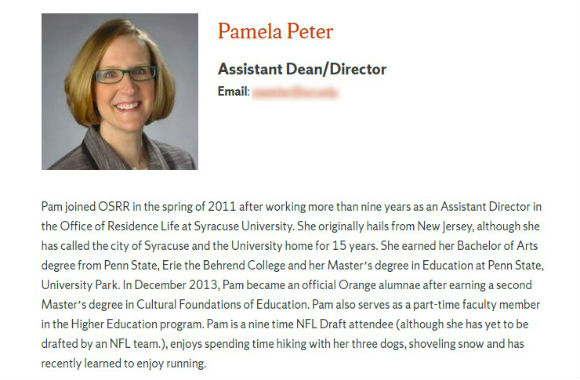 Peter allegedly told the students they weren’t “personally responsible” for any conduct code violations, but “they were responsible as a group for harassment based on the fact that students on campus were ‘afraid to go to class,'” Felter said:

They were told that because they didn’t stop the harassment, they were responsible. Of course, no one in the videos was actually harassed. The only people offended by the video content were not present or the targets of the performances. …

By definition the conduct is not harassment as defined by the student code.

Fifteen of the 18 students were offered suspensions of 12 to 18 months in exchange for skipping formal disciplinary hearings, and three were offered expulsion, Felter told The Fix: “Most chose to reject the proposed penalties.”

While they wait on the lawsuit to proceed, the students have been banned from “university activities” including attending classes, she said. During this “quasi suspension” – the subject of a due-process claim in the lawsuit – Syracuse is also preventing them from trying to transfer.

‘We fully expect the disc[iplinary] panels to uphold the proposed penalties of the Case Manager [Peter] in which case we will amend our legal claims to include the actual imposition of arbitrary punishments,” Felter said.

Syracuse media relations finally responded to Fix inquiries going back to April 20 on May 3.

Syracuse University does not comment on the specifics of pending litigation. The University stands by the actions it took to protect the well-being of the campus community and maintain a respectful and safe learning environment.  The student conduct process continues and the announced timeline remains the same.

No one threatened to expel Syracuse students behind ‘Daily Show’ clone

Felter also provided The Fix an op-ed (below) written on behalf of the Syracuse chapter of Theta Tau, intended to serve as its “collective statement.”

It was submitted to Syracuse.com, the online counterpart to the Post-Standard, in response to the newspaper’s editorial that mocked the “lame excuses” by the fraternity for the videos’ content.

The editorial board said the members “deserve whatever punishment” they receive from the university, and “anyone who wrote, performed or filmed the videos ought to be expelled.” It also urged Chancellor Kent Syverud (above) to “not let this incident slide” as the university likely faces more lawsuits and pressure from parents and alumni.

Felter told The Fix “it is our understanding” that Syracuse.com refused to run the op-ed “because it was not signed by an individual.” It was submitted collectively for the chapter to spare the students from having to identify themselves and waive their rights under the Family Educational Rights and Privacy Act.

Marie Morelli, who handles op-ed submissions for Syracuse.com, told The Fix in an email that the op-ed was sent by an “anonymous sender” who had not called Morelli to verify its “authenticity.”

She spoke to Felter Tuesday afternoon, and the issue was apparently resolved. Felter told The Fix Tuesday evening that the op-ed would be published without naming the students. Morelli didn’t respond to a followup question about how the op-ed would be attributed.

In the op-ed given to The Fix, the fraternity says the editorial board “chooses to ignore” the context of the videos and the fraternity’s own ethnic diversity:

A black member used parody to roast fellow black members and a Jewish member pretended to slander Jews. The videos, albeit offensive, were indisputably a satirical performance and clearly intended by all those present to lampoon the invidious characters and attitudes portrayed by the participants.

The fraternity noted the different Syracuse reaction to an earlier work of satire: a TV show modeled after The Daily Show that was removed in 2005 from the student-run TV station HillTV, whose status as a recognized student organization was later revoked.

Over the Hill made many “potentially offensive jokes” in the same vein as the Theta Tau skits, but administrators didn’t claim the students who produced it actually held the views behind those jokes, the op-ed says:

In fact, no individual student involved in writing, producing, performing or filming the offensive content was sanctioned or disciplined. The University clearly recognized that the comedy show, while offensive, was satire. …

Unlike the “Over the Hill” broadcasts, the people offended by the Theta Tau videos were not, by any reasonable view, a target of the performances. And while the videos have distressed many on the Hill [campus], they were never intended to be viewed by anyone outside of Theta Tau. While the Chapter, like HillTV, may ultimately be responsible for the creation of the skits, the individual members of the Chapter should not be held individually responsible for offensive satire any more than the reporters and producers of “Over the Hill.”

Over the Hill wasn’t the last satire-related controversy at Syracuse before the Theta Tau videos.

The university brought harassment charges against a law student, Len Audaer, in 2010 for his role in a parody blog about life in law school in the vein of The Onion.

The Foundation for Individual Rights in Education hounded the administration – which also sought a gag order on Audaer – until Syracuse dropped the charges against the student, who was facing expulsion. (The Post-Standard‘s headline on the resolution: “Syracuse University law student learns there’s a limit to free speech.”)

Roy Gutterman, journalism professor and director of Syracuse’s Tully Center for Free Speech, told The Fix in a phone interview he was “pretty vocal in opposing the actions against the student [Audaer] in that case,” which took place under a previous administration.

While Gutterman said the satirical blog was similar to the Theta Tau videos in that its content was “outrageous and offensive,” the similarities end there: One took place under different rules in a law school, and the other in a recognized fraternity.

Speaking to The Fix the same day the Theta Tau participants sued the university, Gutterman said he would reserve judgment on the university’s choice to pursue charges until the disciplinary proceeding was concluded.

“At this point at least there is a level of process, procedure and hopefully due process” for the accused, he said: “However, now [going forward] it’s a closed-door process with confidentiality, so we are all left to either wait and see what happens or make presumptions about what goes on behind closed doors.”

The purpose of the hearing process will be to determine whether the Theta Tau videos, which are “very difficult to defend … fit snugly into a prescribable section of the student code,” he said.

Gutterman excused Chancellor Syverud for his rush to judge the fraternity’s behavior as a potential criminal matter.

It was a “fair statement” for Syverud to make in the “heat of the moment,” when there was a lot of “grayness” around the videos, Gutterman said: “The chancellor has an obligation to protect students and protect the reputation of the university.” (Five days after first promising “legal” action, Syverud reiterated his claim that the fraternity potentially violated the law.)

Gutterman said he’s not worried about Theta Tau members getting a fair hearing. “The overall integrity of the university is in some ways in play here. I have faith in Syracuse the process will play out fairly.”

UPDATED: Syracuse responded to Fix queries May 3, 13 days after the first query about Syracuse’s planned action against Theta Tau, its members and pledges. Its statement has been added.

MORE: Syracuse charges 18 with satire ‘beyond the bounds of free speech’