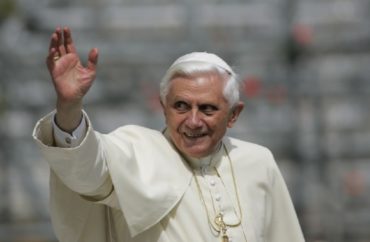 Professors mourned the death of Pope Emeritus Benedict XVI, who died today at the age of 95.

For many academics, Pope Benedict was not just the leader of the Catholic Church, but also a fellow scholar, who taught for decades as a professor in Germany. He also wrote 66 books, which may be the most ever written by a pope.

“Thank God for him,” Thomas Petri, a priest and president of the Dominican House of Studies, wrote in a tweet commenting on the pope’s influence.

“I don’t know anyone who has worked closely with him who does not recognize his holiness and his brilliance,” Jesuit priest Joseph Fessio said in a statement sent out by Ignatius Press.

Fessio studied for his doctorate under Pope Benedict’s direction. He said that he expects Pope Benedict could be made a doctor of the Catholic Church, an honor reserved for those “whose teaching on faith has been deemed sound and of benefit to the church through their writing, study, or research,” according to U.S. Catholic.

Theology professor Vincent Twomey, a priest who taught in Ireland, echoed Fessio’s sentiments in a statement sent out by Ignatius Press.

“Joseph Ratzinger/Pope Benedict XVI will be remembered above all for his literary and scholarly output,” Twomey stated. He predicted that the pope would be declared a doctor of the church.

“His writings on a vast spectrum of theological and philosophical topics have a clarity and a depth that make his theology inspiring and therefore liberating,” the priest stated. “His theology also stimulates further scholarly research, since all he could ever do was sketch the contours of the truth.”

“Pope Benedict XVI was a gift of God, one of the very best teachers we have ever had, an equal to Gregory the Great, Leo the Great, and Leo XIII,” he commented through the same publishing company. “A shoo-in for Saint and eventually a Doctor of the Church.”

He taught me to be a Catholic set against the dictatorship of relativism; he formed my piety, awakened me to the beauty, truth & perennial power of the ancient mass. His life was principally a conversation with God — and we are beneficiaries of that.

“He taught me to be a Catholic set against the dictatorship of relativism; he formed my piety, awakened me to the beauty, truth & perennial power of the ancient mass,” the theologian tweeted. “His life was principally a conversation with God — and we are beneficiaries of that.”

MORE: All I want for Christmas is for Catholic universities to be Catholic