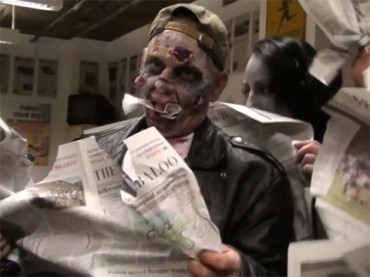 We thought it was over, but apparently not.

The student government at Wesleyan University voted Sunday night to recommend a potential cut of $17,000 from the $30,000 printing budget of The Argus, its student newspaper.

The Student Press Law Center reports that the resolution sets up a working group that will consider various funding options for student media (subject to “administrator approval”). It would consider creating 20 paid positions that could be doled out to publications including the Argus.

Think of it like firing an employee and inviting them to reapply to their old job for a lower salary (actually, that’s exactly where higher ed is going with tenure and adjuncts).

Except in this case, the employee must win a popularity contest to come back. Seriously – read the resolution and its spin-heavy press release. Here’s the student government’s tweet apologetics. Keep in mind this entire controversy over the paper’s funding was spurred by our writer Bryan Stascavage’s rather mild Argus column against the Black Lives Matter movement, which spurred student activists to trash newspapers and demand the Argus genuflect to its political agenda.

Stascavage told the Student Press Law Center he doesn’t consider the resolution retaliatory against the Argus, and he’s rather sanguine on the situation.

WSA and Argus officially have a year to talk things out. Not exactly the best result, but no way the worst one either.

But the Argus editors themselves are taking no chances, setting up a donation page that lays out the stakes for the 147-year-old paper and independent journalism at Wesleyan:

If the [defunding] petition is turned into a [student government] resolution and that resolution passes, The Argus will lose all or most of its funding, and quite possibly its editorial autonomy. In the face of these unexpected financial difficulties, The Argus is pursuing alternative fundraising methods. We will need your help in order to keep The Argus in print while maintaining total control of its content.

The editors also explained in a Friday editorial why the resolution was shortsighted and counterproductive to improving the quality of student media at Wesleyan (and why the print cut is a pointless exercise).

Other observers aren’t buying the student government’s spin that this is about helping students or the environment (by cutting the print run).

Robby Soave at Reason points out the funding shuffle “looks like a revenge of sorts” against the Argus for publishing a conservative op-ed, a one-two punch in line with the activists’ thuggish behavior:

These activities were an explicit threat to The Argus: run different material—material that doesn’t offend the sensibilities of liberals—or else.

Not everyone is convinced this is a threat to student journalism or the willingness to publish unpopular views, though.

Angus Johnston, a professor at the City University of New York and “historian of student activism,” writes that this seems like a good-faith if muddled attempt to solve a problem plaguing cash-strapped campus publications:

It is unclear how the print revenue aspect would work — a fact they appear to acknowledge in deferring that aspect of the plan until Fall 2016. The student vote on publication support seems likely to lead to a mismatch between publications’ needs and their resources, and has the potential to facilitate reprisals against any publication that incurs student anger. The question the Argus raises about the disconnect between writers and editors in the stipends is a serious one.

At the same time, however, the plan is an attempt to grapple with a real problem — the distortions in staffing that arise from an all-volunteer editorial staff — that the Argus’s current setup has no way of dealing with. It does not appear to be a subterranean attempt to defund the paper, much less a targeted attack on the Argus’s editorial freedom. Rather, it seems like a solid, genuine attempt to grapple with the vital issues raised by last month’s protests while addressing the civil libertarian arguments made against the original petition.

New York writer Jesse Singal, who had earlier blasted the treatment of the Argus and tweeted that it had been defunded based on an erroneous tip, falls more into Soave’s camp.

2/2 can tell = a fair rundown by @studentactivism, though I'm more skeptical than he is a/b underlying motives https://t.co/ygg3twmgcu

I’m not confident this will turn out well for editorial independence either, for any publication.

Timing matters in politics. By passing this resolution on the heels of an intimidation campaign by a band of activists who consider free speech a zero-sum game, the student government is not rewarding deliberative debate.

It’s encouraging future activists of all stripes – not just one element of one coalition – to make a ruckus whenever someone says something they don’t like, and see if they can use the power of the purse to punish those speakers for their views.

The best course would have been to do nothing – to tell the activists who have been harassing Stascavage and Argus staff that they blew their chance at media reform for the academic year because of their antics.

To use an example more familiar to progressive readers, Wesleyan student leaders basically took the stance that Sam Houston State University did when one of its students tweeted something dumb about a cop who was executed: It poured fuel on the fire.