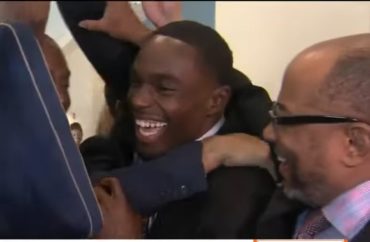 The University of Wisconsin-Madison has readmitted football player Quintez Cephus almost as quickly as he was acquitted in a court of law.

Last week, black leaders called upon UW Chancellor Rebecca Blank to readmit Cephus based on his being cleared of sexual assault. Cephus’s lawyer noted pessimistically that UW officials “gave him a ‘clear message'” they didn’t want Cephus to return.

But in a statement posted on its website yesterday, UW said Cephus “has been reinstated as a UW–Madison student, effective immediately.”

UW–Madison has a responsibility to investigate allegations of sexual misconduct in a prompt and thorough manner, as directed by state and federal laws. The university applies its code of conduct impartially and consistently regardless of the identities of the individuals involved.

In the case of Quintez Cephus, this process functioned appropriately and in accordance with state and federal guidelines and proceeded based on the information available to UW–Madison at the time of the university’s investigation and hearing process.

With penalties reduced, Cephus still was held accountable for violations of the “student non-academic misconduct code.”

Chancellor Blank said she “recognize[s] that some will disagree with [her] decision.”

The Wisconsin State Journal reports that Cephus also has rejoined the UW football team, and has had his scholarship reinstated. He faces some eligibility issues, but UW Athletics did not elaborate on what they are.

Professor KC Johnson believes the university’s decision “is the latest tangible effect of the [7th U.S. Circuit Court of Appeals] Purdue opinion earlier this year.” The court had chastised Purdue for not reviewing an investigative report before deciding a (male) student’s guilt, and for not showing that report to the accused.

“John Doe” had been kicked out of the Purdue Navy ROTC program based on Purdue’s decision, ruining his career plans. The circuit court declared Doe had a “protected liberty interest” in that career, and remanded the lawsuit to the original trial court.