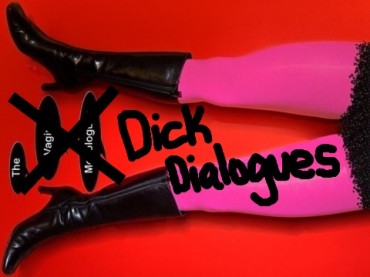 You’ve heard of the The Vagina Monologues? Well … penises want some of that V-Day action, too.

Student activists at UCLA recently debuted the inaugural Dick Dialogues, a production that aimed to fill the gap left by The Vagina Monologues, which take place across the nation in February.

“The hard and fast rules about The Vagina Monologues is that you have to have a vagina in order to perform,” junior Alec Moore told Daily Bruin Radio. “So we wanted to create a forum where all those who’d be excluded from The Vagina Monologues could stand up in front of an audience and put up their own opinions and feelings.”

During their performances, male and transgender students stood on stage and talked about their privates’ private struggles. The event took place Wednesday at the public Southern California-based university as an open-mic night that featured storytelling, song, dance, slam poetry and rap – expressions that touched on sexism, transgender struggles and masculinity pressures, the Bruin Radio reported.

The event was inspired by The Vagina Monologues, a 17-year-old play that consists of various vignettes performed by women on topics such as sexual encounters, molestation, rape, orgasm, menstruation, lesbianism and child birth.

UCLA’s Dick Dialogues is not the first time this school year that The Vagina Monologues has faced criticism for being too narrow in focus. This year’s Columbia University and Barnard College’s joint production of the venerable play excluded white vaginas – only vaginas of color were allowed onstage.

“The Vagina Monologues has historically overlooked the empowerment of women of color, queer women, and trans* folk, among others—often replicating and perpetuating the same systems of power and privilege that prompted the playwright, Eve Ensler, to write The Vagina Monologues in the first place,” producers had stated in announcing their decision. “The marginalization and erasure of these groups in such a generative and influential feminist play speaks to a failure to consider the effects of power structures outside gender within the feminist community.”

Along those lines, producers of UCLA’s performance said they wanted to give a platform to the rainbow of sexual and gender preferences that struggle with similar issues.

“The Dick Dialogues challenges traditional perspectives of gender roles, especially their impressions that the conventional definition of masculinity imposes on men,” reported Laila Vinson of Bruin Radio. “Throughout the event it became clear that this was more than merely a dialogue about dicks, but rather a discussion about the implications of modern gender roles as a whole.”

“From The Vagina Monologues to Dick Dialogues, conversations about sexuality are moving into public awareness and helping redefine what it means to be masculine or feminine in 2014.”

UCLA is also putting on a Vagina Monologues production this year.