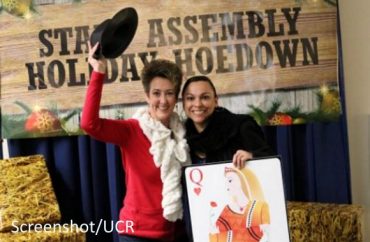 Sometimes it seems the word “Christmas” is like poison to universities. This latest example is no exception.

The University of California Riverside recently hosted a “Staff Assembly Holiday Hoedown,” and pictures posted on the institution’s website show organizers bent over backward to make sure it could not be accused of being a Christmas party.

“Handkerchiefs, boots, and cowboy hats set the stage for the 2016 Staff Assembly Holiday Hoedown, which treated about 400 employees to an afternoon of games, food, dancing, and prizes,” reports Inside UCR. “This year’s holiday party — featuring live music by Gold Rush Country — took place on Dec. 16 at the HUB.”

The tables were decked with red and white handkerchiefs and some straw. Many guests wore cowboy hats and flannel shirts. A photo opportunity area was adorned with haystacks. The only thing that denoted Christmas were a few white strands of lights and some small wreaths, but they were carefully flanked by Texas Longhorn skulls.

The fete was funded by dues paid by employees toward the Staff Assembly, a volunteer organization that serves as an advisory body to the chancellor on staff matters, but is not a collective-bargaining agent.

The holiday gathering is an annual occurrence, and every year the theme is different. Last year was much like this year, avoiding the dreaded word “Christmas” with a masquerade-themed event.

MORE: Public university tells campus: ‘Ensure your holiday party is not a Christmas party in disguise’