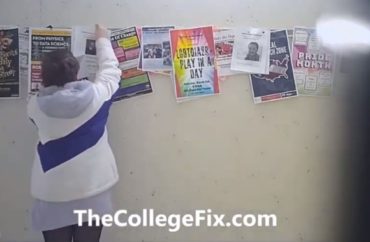 Tayler Lehmann is a junior at the University of Minnesota Morris, and one thing has stayed the same during his college career so far — peers have always stolen College Republicans’ fliers.

“It’s been always happening, ever since I have been a freshman,” said Lehmann, a business management major who today is president of the UMM College Republicans.

They’ve complained in the past, and their fliers kept disappearing. More recently, a camera trained on one of the most heavily traversed tunnels at the public university was broken — the exact spot where most of the theft occurred.

“It’s lasted this long, I thought, ‘I better do something before I graduate,’” said Lehmann, 21. “It’s been happening since I stepped foot on campus as a freshman and nothing got done. Part of the time the cameras didn’t work and people just kept taking down our posters. I guess we got fed up with it and we thought of a way to handle it ourselves.”

So the College Republicans bought a $30 camera off the Internet and took matters into their own hands. The tunnel links the science building and the student center, and one side is flanked with lockers. The student GOPers installed the little camera in a locker, trained it through a small hole toward their hanging fliers, hit record, and sat back and waited.

Their little sting operation took place in recent weeks. And the results? It didn’t take long before the club had accumulated a mountain of evidence to take to campus cops.

Several student passersby took the fliers down, according to the video, obtained exclusively by The College Fix. Others drew big Xs through them. One student used other posters to cover the College Republican ones up. And in one video, a woman wearing a UMM shirt, possibly an employee, is also seen taking down the fliers.

The fliers advertised the College Republicans’ meeting time and location. One quoted Brett Kavanaugh’s infamous line about liking and drinking beer. Another pro-life themed one calls Republicans “the party that has a future” because it doesn’t kill babies. A third declares there’s only two genders. And of course there’s one featuring President Donald Trump.

Asked whether he thought the CR fliers were provocative, Lehmann said no way.

“They are definitely acceptable compared to other posters all around them,” he said. “Some of them were about making fun of the [border] wall, and there is a club on campus called Queer Devil Worshippers for a Better Future, and they post random posters.”

Lehmann said well over 50 of his club’s fliers were taken down or vandalized during the course of their operation. It got so bad, he said, they stopped printing the fliers in color and switched to black and white copies to save money.

In all, the club turned over video evidence of nearly 10 examples of vandalism or theft of their posters, Lehmann said. He said in a conversation with campus police this week, he was told the evidence would be submitted to a campus behavior committee as well as possibly county prosecutors.

In an emailed statement to The College Fix, campus spokesperson Melissa D’Aloia would only say “campus police conducted an investigation regarding the fliers. Once that investigation was complete, all evidence gathered was turned over to the Stevens County Attorney’s Office. .. [T]he decision on how to proceed is determined within that office and thus we are not able to comment.”

She declined to comment further on any aspect of this situation.

Lehmann said the camera in the main tunnel has now been fixed and their clandestine operation is over, calling the results a step in the right direction.

“Something good finally happened on this,” he said.