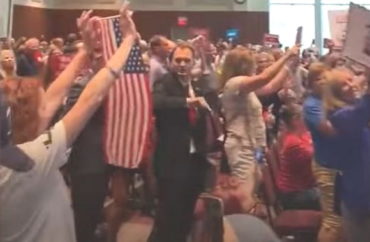 ANALYSIS: While the left has gone all-in on critical race theory, Tuesday’s election results show the vast majority of American parents have made it clear that they reject Democrats’ divisive rhetoric in the classroom

From the Virginia gubernatorial contest to local school board elections throughout the country, critical race theory proved to be a critical issue for voters on November 2.

In Virginia, businessman and political novice Glenn Youngkin soundly defeated former Gov. Terry McAuliffe in one of the most unlikely gubernatorial upsets in recent memory.

For instance, in Douglas County, Colorado, four political outsiders ran for school board positions on a “Kids First” platform, in which they rejected critical race theory and other so-called Diversity, Equity and Inclusion curricula provisions.

All four of the “Kids First” candidates were victorious over their teacher union-backed counterparts.

Becky Myers, one of the “Kids First” candidates and a former public school teacher, dedicated her victory to parents, who she said should have the ultimate say in their children’s education.

“These parents, these supporters that voted us in, we need to know, what do they want first? What do they want us to get in there and tackle first? And I’m thinking, at this point, they want our kids in school, they want them educated and they want mandates gone,” she said after her win.

Although it has become a national issue of late, critical race theory has been around for decades. In recent years, it has seeped from college campuses to middle and high schools, and even elementary schools.

In many ways, the COVID-19 pandemic and associated public school shutdowns allowed parents throughout the country to finally see what was — and wasn’t — taught inside the classroom they pay for with their tax dollars.

While the left has gone all-in on critical race theory, Tuesday’s election results show the vast majority of American parents have made it clear that they reject Democrats’ divisive rhetoric in the classroom.

A few months ago, it seemed like a McAuliffe second term as Virginia’s governor was a fait accompli. The vast majority of polls showed McAuliffe with a commanding lead.

Yet, that was all before McAuliffe committed one of the biggest political gaffes in contemporary history. At a debate in late September, McAuliffe uttered this now-infamous quip: “I don’t think parents should have a say in what is taught in schools.”

As if that wasn’t bad enough, McAuliffe went on to repeatedly deny critical race theory was being taught in Virginia’s public schools. Despite his denials, parents knew better. After all, critical race theory and “Diversity, Equity, Inclusion” is peppered all over the Virginia Department of Education website.

Independent journalist Matt Taibbi, reporting on Virginia election results, noted that while he met Virginians who didn’t care about critical race theory, they were “still offended by the existence of a closed Facebook group — the ‘Anti-Racist Parents of Loudoun County’ — that contains six school board members and apparently compiled a list of parents deemed insufficiently supportive of ‘racial equity efforts.’”

“Still others were troubled by a controversy involving the process by which an outside consultancy called the Equity Collaborative came to be hired, at a cost of roughly $500,000, to conduct an ‘equity assessment’ based on a report of racial insensitivity at one school.”

The victories in Colorado and Virginia indicate that parents want schools to return to their original calling — reading, writing and arithmetic.

According to Mike Peterson, one of the “Kids First” Colorado school board election winners, “anything that creeps over into critical race theory, division, intersectionality, some voices being more valid based on the speaker and not on the merit or the virtue of the argument, we’re going to separate the wheat from the chaff, keep the good and we’re going to get rid of the bad.”

One year before a monumental mid-term election, critical race theory could be the proverbial canary in a coalmine.