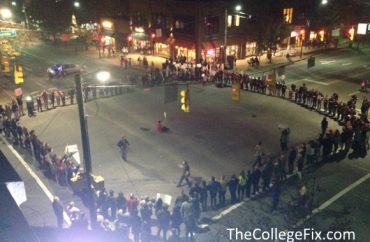 CHAPEL HILL, N.C. — Hundreds of protesters converged at the University of North Carolina Chapel Hill on Friday night to demand “action” against Donald Trump, blocking a busy intersection and pushing a variety of slogans that called for everything from an end to the Electoral College to a sign that read “Abort Pence.”

Other signs carried by demonstrators — mostly college students — stated “No human being is illegal,” “pussy grabs back” and “$15 minimum wage.”

Chants favored by the crowd included “down, down with deportation — up, up with education,” “no Trump, no rape, no fascist USA,” and “love not hate, makes America great.”

Some adults brought their young children to the protest, and encouraged them to shout along with the crowd.

The first part of the protest took place at the main thoroughfare on campus, then the crowd marched around campus, ending up at UNC’s historic Old Well to allow time for speakers.

Organizers warned against giving any graphic descriptions of violence because it might trigger some. They also said people of color would have priority speaking.

The first speaker began by saying “I am a black woman who is not a Christian, so I am the number one target of Donald Trump’s policies.” She then continued her criticisms of the president-elect before calling for action, saying “I’m going to take over the street, and I’m going to take a group who will go with me.”

The following speakers carried a similar message, saying they were going to be targeted by Trump’s administration. One male said was undocumented and his biggest fear was his “parents will be put behind bars for years.” He accused Trump of ignoring the rights of immigrants, then continued “without these laws, without this Constitution, this country is nothing.”

Another speaker said she didn’t attend class the day after Trump was elected. Instead she “stayed home and cried for two hours.” She called for further action, and ended by saying, “to the people of the world who are calling us weak for protesting. Do we look like we’re crying?”

At one point the event organizers asked for “more people of color, more queer people” to come forward and speak.

The next speaker accused Trump of making “some of the most extreme, insane racist” appointments of all time. He told the crowd they still had hope because the Electoral College has the right “to deny Donald Trump the presidency.”

Despite his anti-Trump message, this speaker still failed the politically correct litmus test, telling people to “go to your congressman, ask him…” at which point he was interrupted with shouts of “of her!” Brushing off this faux pas, he told the crowd it was important not to “piss people off,” and to be reasonable.

At this point the crowd appeared to get restless, with one man shouting the event was “not enough, but a start.” The next speaker rallied the crowd into action, shouting “Kindness is not enough! Kindness alone will not win this battle! We need to take action! We need to take to the streets!”

The crowd then marched back to their original location, blocking the intersection of Franklin Street and Columbia streets.

They camped there for a while, interlocking arms in a large square, blocking all four roads of the intersection. Demonstrators would occasionally come forward to lead a chant in the middle of the road or attempt to entertain the crowd.

One protester did hand stands for a while. Another male danced around shirtless. At one point, a lesbian woman dragged her partner into the middle of the square to propose. After she said yes the crowd erupted into cheers of “love trumps hate.”

As they approached a police car they started chanting “hands up, don’t shoot!” Despite their concerns about police brutality, officers simply helped direct traffic through the mob of protesters. As the protesters marched down Franklin Street, the police went ahead of them, turning around cars headed in their direction and clearing the streets.

The protesters then stopped at the intersection of Franklin Street and Graham Street, where again they blocked the roads and started chanting.

The protest was organized by three students from Northwood High School in nearby Pittsboro.

Nikolai Mather, one of the event organizers, said that the street protest was not what had been planned.

Mather said the original plan had been merely to meet up at the Old Well and talk about everyone’s post-election experience and what to do move forward. Instead, during the discussion people repeatedly called for action and to “take the streets.”

“It was supposed to be a way for the community to come together, get out the anger, and work towards something positive,” Mather told The College Fix. “It kind of took a different change, we went for the streets instead of for the Old Well, but if this is how we’re going to express our anger, as long as we keep this up and turn it into something even more positive, I’m good with this.”

Mather said the event had been planned with two other classmates, describing them as “just three twinks who don’t like Trump.”