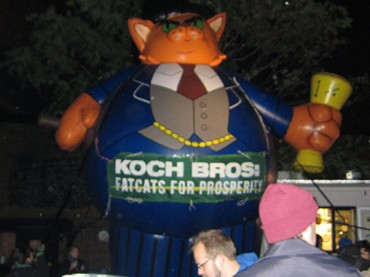 A legal dispute involving a former Koch Industries employee has led a prominent academic freedom group to contradict its previous advocacy for the privacy of “scholarly communications.”

A student group at the University of Kansas, Students for a Sustainable Future, filed a state open records request last April for documents pertaining to the hiring of several faculty members within the university’s business school.

It also included a request for the email correspondence of lecturer Art Hall, who served as chief economist for the lobbying sector of Kansas-based Koch Industries from 1997 to 2004.

Through the documents, the student group seeks to investigate the influence of the libertarian billionaire Koch brothers in the business school.

When the university asked the group to come up with the money for the request, the state chapter of the American Association of University Professors stepped in with most of the funding.

The records request is on hold for now: A judge issued a temporary restraining order last month so as to “avoid immediate irreparable injury, loss and damage” to Hall, the Kansas City Star reported.

While Hall’s former employment and current financial ties to the Kochs are not a secret, he told The College Fix it has nothing to do with the content he teaches.

“Koch Industries, the Koch Foundation or any Koch entity has no impact on what I choose to teach in the classroom,” Hall said.

Hall serves as the executive director of the Center for Applied Economics, a think tank that is independently funded by the Fred C. and Mary R. Koch Foundation among other donors, but which operates out of the university’s business school. “Ensuring an unbiased academic environment is in the interest of liberals and conservatives, alike,” Schuyler Kraus, the president of the student organization, wrote in a Lawrence Journal-World op-ed in September.

“Yes, our primary focus is the Kochs; that is simply because they are the epitome of donors who exercise undue influence in academia and legitimize political agendas with questionable academic credentials,” Kraus wrote.

Students for a Sustainable Future further requested any correspondence or documents between Hall and specific organizations, including Americans for Prosperity, the Cato Institute, Reason Foundation and the Heartland Institute, spanning more than 10 years.

“Because I used to have an association with Koch Industries and you look at the list of organizations [that he corresponded with], which are basically Koch organizations or Koch-funded organizations, I think they have some theory that I’m a pawn of some type and they want to prove that my ideas and my comments aren’t genuine,” Hall told The Fix.

Hall called the move an “open-ended fishing request” – so broad that “ironically, they wanted stuff prior to the center even opening and me even arriving to KU.”

Harassing a climate scientist is bad, but not a conservative economist?

The fervor surrounding the student group’s request died down as the administration calculated the amount of effort it would take to fill such an extensive request, according to Hall.

“And then the price tag came out,” Hall said.

The cost to fulfill the request would be $1,800, due to the lengthy time span of the requested materials and the amount of staff effort it would require.

Kraus’s op-ed said that her group shouldn’t have to pay for the request.

They are not only “tuition-paying students” but “taxpaying Kansans,” Kraus said. “When its dedication to academic freedom and intellectual integrity is legitimately questioned, it should be the university’s responsibility, not the students’, to prove otherwise.”

By virtue of his position at KU, “Hall is able to continue lobbying for the Kochs under the guise of an academician, streamlining their political agenda straight to Topeka,” the state capital, Kraus wrote.

Kraus did not respond to a request for comment from The College Fix.

Following the school’s demand for money, “lo and behold, out of the woodwork comes all of the donations to pay KU, and then the request became formal,” Hall said.

One of those donations was $1,000 from the Kansas chapter of the American Association of University Professors, which appears to have changed its previous position on the privacy of professors’ work product.

When the Republican attorney general of Virginia sought the communications of climate scientist Michael Mann, then at the University of Virginia, the national AAUP spoke in favor of professors’ privacy.

“Recent developments involving Freedom of Information Act (FOIA) requests have evoked concern, even alarm, that scholars may face intrusive demands for a broad range of documents,” Robert O’Neil, counsel for the AAUP, said in a 2011 recommendation to the association’s academic freedom committee.

“We would urge that the AAUP support legislative efforts to create exemptions or exceptions to state freedom of information laws that would protect scholarly communications and similar sensitive materials.”

While gathering up his emails to satisfy the request, Hall realized he wanted a second opinion.

“I had never had to think about all of these issues before,” Hall told The Fix – and when he did, he realized there were “legitimate points of differences on the interpretation” of the Kansas open-records law. That’s when he sued the university to block the release of his correspondence.

“’Lawsuit’ sounds hostile by its nature, but it really isn’t a hostile move,” Hall said.

Rather, Hall wants to clear up the legal gray area between academic freedom and the public’s right to know, not hide his Koch ties.

“There are legitimate points of disagreement about what is or is not a record that should be released,” including how to delineate when his emails are private or not, Hall said – and it will impact the future of academic discourse.

“If my private, personal communications are released, I will not be the only one whose academic freedom is jeopardized,” Hall wrote in a Journal-World op-ed last month. “The issue is much larger and could ultimately jeopardize the academic freedom of any scholar at a public institution of higher education.”

Despite Students for a Sustainable Future’s allegations of Hall’s biased teaching, he is popular among his students.

Although Hall has mixed reviews on RateMyProfessors.com, students’ criticism of him focuses on how difficult his exams are and how much reading his classes require.

“Test are [sic] insanely TRICKY,” one student wrote in 2013. “The work effort required to pass this class is extensive. It is not fun, but resulted in me actually learning something.”

“One of the best teachers in the Business School,” another student wrote in 2011. “Amazing class structure.”