A nigh-perfect example of why so many believe America’s public schools are filled with progressive ideologues is featured in this Education Week report about Wednesday’s U.S. Capitol mob riot.

Ed Week is little different from other mainstream media; certain terminology and narratives often are utilized despite ridiculous hypocrisy.

And that’s the issue with what happened in Washington, DC: The vast majority of right-leaning folks and Trump supporters do not support what transpired at the Capitol. They do have an issue with the media treating the incident like the apocalypse while every possible excuse was utilized in commentary about last summer’s Black Lives Matter/Antifa protests.

The Ed Week piece begins with the title and first paragraph: “Insurgency at the U.S. Capitol: A Dreaded, Real-Life Lesson Facing Teachers,” with authors Madeline Will and Stephen Sawchuk referring to the protesters as “a violent, far-right mob.” But “insurgency” implies (and even denotes) folks being armed, and so far there is no indication any the Capitol protesters were.

(Keep in mind: When demonstrators are progressive, their actions are “mostly peaceful” with just a smattering of troublemakers.)

To help bolster their case, the authors note — devoid of context — that “a woman was shot inside the Capitol and later died.” According to reports, the woman was a Trump supporter and an unarmed 14-year Air Force veteran. She was shot by a police officer.

Need it be mentioned how progressives feel about law enforcement shooting unarmed people/protesters? (A police officer did succumb to an injury sustained during the Capitol riot after the Ed Week article was published.)

Will and Sawchuk then move on to the inevitable race component, because everything is somehow so linked these days: “Among the difficult subtexts [for teachers]: the unsubtle implication of scenes of a violent, mostly white crowd rampaging through the Capitol practically unchecked, compared with often forceful put downs of last summer’s Black Lives Matter protests.”

Academics and several of the Ed Week authors’ subjects back this up, citing “white privilege” and hyperbole like “coup” and “armed occupation.” Social studies teacher Adam Dyche used the latter definitively but wasn’t quite “sure yet” about the former. (A social studies educator thinks a coup can occur with no weapons in hand and no military behind in your corner?)

The president of the Common App jumped in on this theme with an email to students claiming that “violent white supremacist insurrectionists” were responsible for the Capitol mob, and alleging that “the stark differences between how peaceful Black and brown protesters have been treated for years relative to Wednesday’s coup” once again show how America suffers from systemic racism. 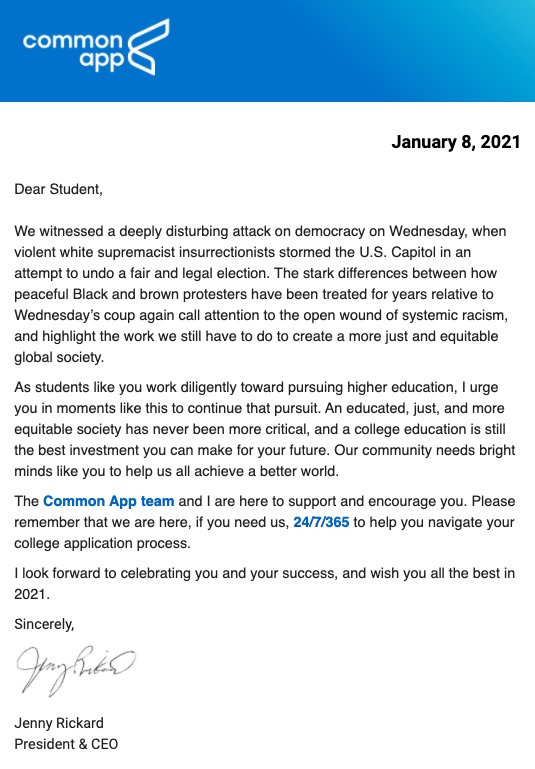 In my home state of Delaware, the president of the Delaware State Education Association, (the state NEA affiliate) referred to Wednesday’s events as “seditious acts” and implored the state’s teachers to “come together and move forward” with the Biden administration. 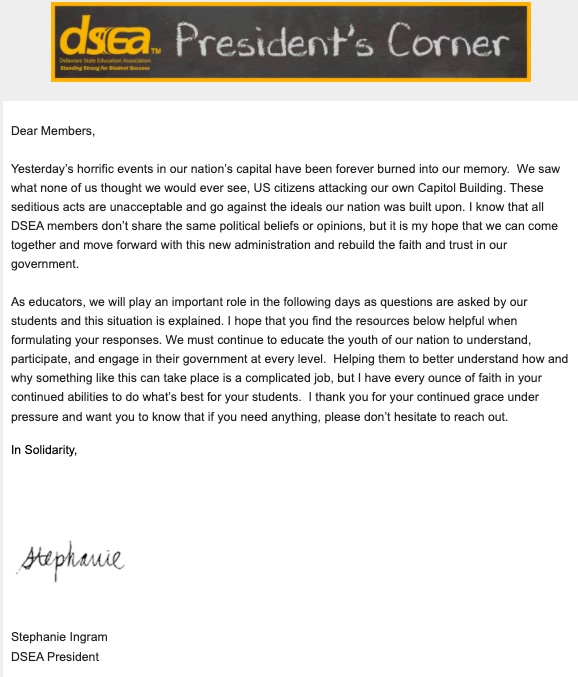 But are these racial complaints accurate? Examples like this — where police allowed BLM/Antifa to illegally occupy a house stocked with firearms for months without consequence, and how a separate “country,” or “a homeland for racial justice” as The New York Times called it, was established in the middle of Seattle for a few weeks — are but two contradictions of the narrative.

Not to mention, consider the cost of last summer’s BLM/Antifa protests and riots, in both property and lives.

The first commenter to the Ed Week piece gives a glimmer of hope that there are still clear-thinking teachers out there: “How are we leading our kids to be independent thinkers when we push them in such an obvious viewpoint. I am disappointed and embarrassed that there is such little integrity in these pieces.”

Indeed. Let me assist those like Mr. Dyche with their seeming difficulties in planning and presenting “controversial” lessons in a balanced manner:

— First, note that violence against people and people’s property is not the answer when protesting a political issue, whether it’s Black Lives Matter, Occupy Wall Street or Trump supporters angry about election irregularities.

— Do an in-depth examination of the complaints of Black Lives Matter and those of Trump supporters upset about the election. Compare/contrast their reactions and how the media covered both. Include statistical analyses. Compare and contrast how Democrat and Republican politicians responded and reacted to both.

— Play devil’s advocate from both sides in response to student queries. For example, note specific statistics about police shootings and bring up how courts treated objections to Trump camp complaints about election fraud. Compare and contrast how the media utilized both.

Unfortunately, with today’s ed schools churning out more social justice advocates than actual educators, balanced lessons will be fewer and further between. Conservative/Republican parents need to continue their vigilance about what is being taught to their children, and they need to confront teachers and administrators when the narrative follows that of Education Week.