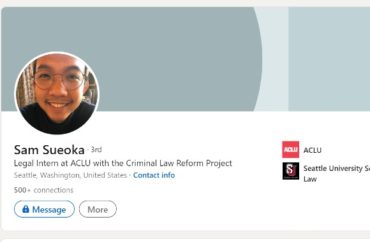 It only took four months, but Seattle University’s law school has acknowledged that it will not let
the campus Federalist Society chapter face punishment after it refused to take a stance on an issue, in line with the organization’s policy.

The cancel campaign at the Jesuit Catholic university was pushed by a liberal student activist who now interns for the American Civil Liberties Union.

A student activist named Sam Sueoka, wrote an email in late January to Kristin DiBiase, SU Law’s associate dean for student affairs. The email demanded the removal of the campus chapter due to the group’s refusal to condemn Senators Josh Hawley and Ted Cruz, for objecting to the certification of the 2020 presidential election.

Sueoka is the vice president of the campus National Lawyers Guild, a national liberal legal organization and recently started an internship with the ACLU, according to his LinkedIn.

DiBiase, instead of shooting down the idea, suggested that Sueoka petition the student bar association, which acts as the student government for the law school, with his request.

She did call his request “troubling” and said she supported the chapter’s “right to exist” but deferred the decision, according to emails obtained by a civil liberties nonprofit.

The Foundation for Individual Rights in Education repeatedly asked DiBiase to clarify her stance and to promise to protect the Federalist Society chapter.

FedSoc is a right-leaning legal network of students and attorneys, but it does not take policy positions.

While many of President Donald Trump’s judicial picks came from the group, liberal Supreme Court Justices Stephen Breyer, Ruth Bader Ginsburg, Elena Kagan and Sonia Sotomayor have all spoken at its events.

“We do not plan to punish the Federalist Society,” Davie Sandler, the university’s director of marketing and communications, told The College Fix, on behalf of associate dean Kristin DiBiase. “At no time during these events has the Federalist Society ever been subject to, or in danger of, removal as a certified student organization on the Seattle U campus,” Sandler said.

He said no group has “ever been pressured or required by the SBA or the Seattle U Law administration to adopt any particular stance or viewpoint.”

DiBiase “consulted the policies outlined in the SBA’s Constitution and Bylaws and properly referred the issue to the SBA and its Judicial Board,” Sandler said. SBA did not respond to emailed requests for comment in the past week from The Fix on the situation.

“Our approach to this conflict was to provide a learning opportunity for our law students as they worked through how to navigate differences of viewpoint,” the spokesperson said. “The SBA leadership resolved this matter appropriately and in a timely manner, but had they not, the administration was prepared to step in.”

The Student Bar Association president said it could not punish the group, but recommended Sueoka try the judicial board instead, according to FIRE.

The free-speech group thanked the university for clarifying its stance.

“Although the law school should have clarified this situation sooner,” Sabrina Conza wrote, “FIRE commends SU Law for ultimately affirming its commitment to protect students’ associational and expressive rights.”

“We will continue to ensure that SU Law — and other private institutions across the country that promise students expressive rights — keep their promises,” Conza said.